Yellow jackets are black and yellow patterned insects that are found buzzing around trashcans and picnic tables. 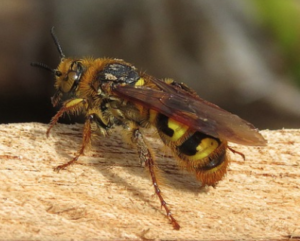 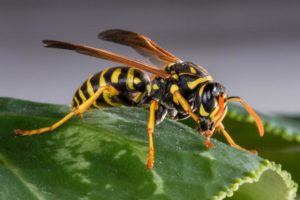 Size
Shaped like wasps, yellow jackets generally measure about a half-inch in length and also boast a set of antennae extending from the head by the eyes.

Body
Three legs extend from each side of the body, while a pair of transparent wings enables the insects to fly. Unlike bees, which are hairy, yellow jackets and other wasps tend to have smooth bodies.

Do They Sting?
They are considered a nuisance and can deliver a painful sting.

However, most yellow jackets are very beneficial. While all yellow jacket species naturally control the populations of other troublesome insects, the pest varieties are categorized as such because the flying, stinging insects regularly cross paths with humans when scavenging for food.

Types of Yellow Jackets
Yellow jackets comprise a subset of wasps belonging to the family Vespidae and genus Vespula. Although nearly 20 different species of yellow jackets live in North America, only five classify as pests. Of the five pest species, the eastern yellow jacket and the German yellow jacket rank among the types most commonly found.

Colonies
Social by nature, yellow jackets live together in colonies that house as many as 4,000 workers. A female queen establishes and presides over each colony.

Underground Nests
The preferred habitats of the yellow jacket varieties depend on the particular species. Eastern yellow jackets typically construct underground nests, often taking over burrows abandoned by other animals.

What do yellow jackets eat?

Insects
The foragers also perform a valuable environmental service by preying on soft-bodied insects such as flies, caterpillars, and other agricultural pests.

Meat
Sometimes these wasps are called “meat bees” because like most wasps, yellow jackets are predators. The larvae (the worm stage) are fed meat by the adults, which fly around looking for such sources. The scavenging insects regularly invade cookouts, dumpsters and trash cans, and other outdoor settings where these food sources are readily available. They also often obtain the same meat from dead animals they find laying on the ground.

Queens
Female queens mate in the fall, overwinter, and emerge in the spring to lay eggs and establish a new yellow jacket colony. Each queen lays about 40 to 70 eggs initially. After the first batch hatches into worker yellow jackets, the queen maintains responsibility for continuing to lay eggs while the workers forage for food, expand and defend the colony, and care for the newly hatched. Read more about the life cycle of a yellow jacket.

Colonies
Yellow jacket colonies continue to grow in population through the summer. The insects mate during the fall as the weather turns colder. After mating, females leave the nest to hibernate while males die. With the exception of fertilized, hibernating females, yellow jackets typically do not survive cold winters.

Dangerous Stings
As territorial creatures that sting when threatened, yellow jackets pose serious problems when the insects construct colonies in areas within close proximity of humans. When yellow jackets sting, they inject a small amount of venom that can cause allergic reactions ranging from slight pain and swelling to wheezing, faintness, and more serious symptoms requiring immediate medical attention. Unlike bees, which have barbed stingers designed for one-time use, yellow jackets enjoy the ability to sting repeatedly. Furthermore, yellow jacket stings produce odorous chemicals that attract and encourage other yellow jackets to join in on the attack. Because yellow jackets defend the colony so aggressively, the insects often prove extremely difficult and dangerous to remove.

The strongest indicator of a yellow jacket infestation is the presence of a paper nest. Yellow jackets construct paper nests either underground, behind walls, or hanging from the eaves of attics or the branches of trees. The paper-like quality of the nests comes from the chewed up cellulose yellow jackets use to build the habitations. When constructed aboveground, yellow jacket nests often resemble the shape of teardrops. Nearby infestations may also produce groups of worker yellow jackets hovering in and around dumpsters and trash cans.

Residents can prevent yellow jacket infestations by eliminating food sources as much as possible. Homeowners, landlords, and park managers should empty and clean outdoor trash receptacles on a regular basis. Trash cans in public outdoor spaces should be placed far enough away from picnic areas to minimize encounters with foraging yellow jackets. When not in use, outdoor dumpsters and trash cans should remain covered.

Make Sure You Are Really Dealing with Yellow Jackets
The first step in controlling any pest is to make certain that you really are dealing with what you think you are. In other words, identify it correctly. There are many kinds of beneficial flies that closely resemble wasps, and there are many kinds of “solitary” wasps, such as sand wasps, which also look exactly the same as yellow jackets, but pose a far, far lower hazard to you.

The problem kinds of yellow jackets are the ones we call “scavengers” – the kinds likely to ignore natural foods and instead go after our picnic foods. They may create their paper nests in either the ground or the air, hanging a nest from a branch of a tree or under the eaves of a house, or, very commonly, in walls or attics or crawlspaces of homes. This is when they become most dangerous to people, and many times they will chew right through the walls and get into the house.

Another, very common, location to find the peskiest of the yellow jackets is in the soil. The queen may find a small hole in the ground where she initiates the colony, and from that small beginning the workers continually enlarge the hole to accommodate their ever-growing colony size. Even in the ground, however, a paper nest is constructed to house all the eggs, larvae, and pupae, and many thousands of workers can be present there as well.

Once you have ensured you are, definitely, dealing with yellow jackets, here are some options to consider:

Eliminating piles of yard or lawn trimmings, piles of lumber, or other unnecessary debris on the ground will eliminate much of the shelter that the queen looks for in establishing the initial nest. Cleaning up fruit that has fallen on the ground will take away a food source and attractant and help keep them from congregating in your yard. This is especially important in late summer and fall, when we have a double edged sword – not only are we more likely to have the accumulation of foods, from apple or pear trees, tomato plants, etc., but the colonies also have reached a peak in their population.

Cleaning garbage cans, tabletops, and other surfaces where we have spilled food. This, too, attracts the yellow jackets, as well as nasty flies that we would really prefer not to share our table with. If you look around your yard and find a buildup of the shiny, sticky honeydew on the plants (from the aphids) you should consider washing it off with the garden hose. You can speed that process up with a hose-end sprayer attachment with some liquid detergent in it.

Watch What You Wear!

Yellow jackets may be attracted to certain colors (yellow, orange, or purple seem to be favorites) or odors, such as perfume or cologne. Commercial insect repellents do not seem to do much to deter them.

Yellow jacket traps can be made from a variety of household items, or they can be purchased from hardware or gardening stores. Various kinds of traps are available, designed to entice yellow jackets in, where they are trapped and cannot escape, dying within the trap. These can be laced with baits that may come with them, or with meats or sweets that you can buy yourself. Those that work well are fish baits – sardines, mackerel, salmon – or citrus flavor soda syrups.

Traps should be placed away from those areas where people frequent, to draw the pests away from people rather than to them. Experience seems to indicate that, while you will no doubt catch a lot of yellow jackets, you should not expect to eliminate an entire colony simply by using traps.

The main feature of these traps is a containment system that lures the yellow jackets inside, and once they are in, they can’t get out. Before cleaning, place the trap in the freezer for a few hours to ensure all of the yellow jackets are dead.

This works well, and may be the method chosen by a professional pest control company, should you contract with one to take care of the problem. However, these experts have protective clothing and application tools you may not, as the chemicals may excite them when their nests are sprayed or dusted.

Generally spraying a yard area is of little value, and “directed spray” aerosol cans are designed more for the smaller, exposed nests of “Umbrella Wasps”.

This is an ideal method, as it provides food mixed with a toxic product, which the foraging workers collect and take back to the nest to feed to their larvae. In the process they kill not only all the larvae, but also themselves, as they are exposed while carrying the meat in their mouths.

Only one pesticide is labeled for this, and it is not generally available to the retail market. However, it is used widely by the professional pest control industry which is trained in how to use it correctly and with little exposure to animals that are not intended for it. Contact a licensed pest control company if you would like more information on this.

Yellowjackets are certainly “beneficial” in their role as predators of other bugs, but there are times that their presence in our yards or homes cannot be tolerated.

In the event of a serious infestation problem, contact a professional pest control specialist to avoid any potential complications resulting from painful, and sometimes dangerous, yellow jacket stings.