As their name suggests, paper wasp nests feature layers of a papery substance. The insects pulverize tiny bits of wood in their mouths until the pieces become pulpy and pliable.

Shape
Then they build an umbrella-shaped nest full of hexagonal cells. This structure can contain as many as 200 cells to house an extensive paper wasp colony. 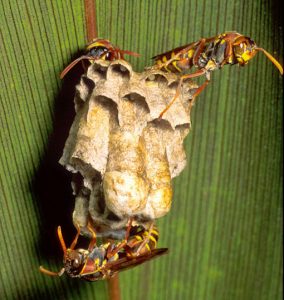 When to Find Them

Knowing what time of year to expect these stinging pests is part of paper wasp nest identification. A queen wasp is responsible for starting to construct a home for her colony. She overwinters in a protected location, emerges in the spring, and begins to work.

By late May or June, homeowners typically start to notice paper wasp nests on their property.

Paper Wasp Nests around the Home

Paper wasps generally prefer enclosed locations or sheltered sites for their nests. Residents should keep an eye on the following areas for signs of infestation: 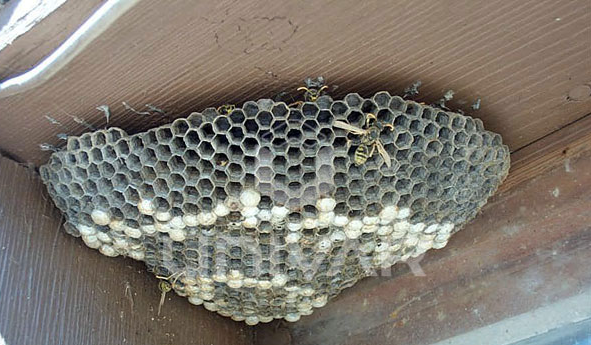 These pests occasionally use plants as building materials. This behavior can stunt landscaping and foliage growth. Many homeowners also find paper wasp nests unsightly, especially when these insects live on the sides of houses.

Though paper wasps aren’t a particularly hostile species, they do attack people who get too close to their nests. A typical sting leads to a few days of pain and swelling. Those who are allergic to wasp venom may have severe and life-threatening reactions.

Since the pests pose a threat to people, homeowners should look into removal for any hives near the house. However, approaching nests will only aggravate paper wasps, so DIY control can be dangerous.

Paper wasps do like to build their nests in protected places, such as eaves, under windowsills, or in attic rafters. Usually, paper wasps only spend one season in a nest. If one is built in an area with a lot of human activity, you may need to have it removed. Be sure to seek help from a pest control expert before attempting to remove a paper wasp nest. Although they are not aggressive, they will sting if disturbed.

Queens in Every Nest
Paper wasps are semi-social, meaning they form smaller groups that usually have more than one queen. These additional queens are relegated to nest building and larvae care, while the true queen continues to lay eggs.

Paper Wasp Queen vs Worker
There is no worker class in the paper wasp colony. The other queens take on the duties of the worker class. As the summer progresses, the queen continues to lay eggs, and when late summer arrives, the newly hatched queens and males fly out to mate.

The paper wasp colony will completely die off in the fall with the exception of inseminated females. Queens will hibernate through the winter, which is a very difficult process. Wet weather and temperatures can kill off a number of over-wintering queens.

When the Queens Leave the Nest
Once spring begins, the paper wasp queens emerge and find a habitat to build a new nest.

How Queens Build the Nests
Paper wasps get their nest building material from places where raw wood is exposed. These include tree branches with the bark removed, or unfinished fencing.

Once the queen has begun the nest, other paper wasp queens will join in the nest building. If the founding queen dies, one of the other queens will take over to continue the success of the colony.

Paper wasp queens will begin to build cells to lay their eggs. When the eggs hatch into larvae, the queens will care for them, feeding them high-protein foods, like caterpillars and other pests. This makes the paper wasp a beneficial insect to most gardeners.