What is it?
The paper wasp is a non-aggressive stinging insect with a variety of species found throughout the United States and the world. 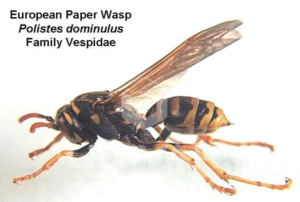 Color
Species in the United States include the northern paper wasp, which has two forms.

One is colored with brown and black markings. The other form, found in the south, has a paler body with two yellow bands. These wasps are widespread in North America.

Paper Wasp vs Yellow Jackets
They can be confused with yellow jackets, but paper wasps have much thinner bodies and longer legs that hang down low when they fly. Paper wasps are much less aggressive and usually will not bother humans unless disturbed.

What Do They Eat?
Paper wasps eat a number of pests, which make them beneficial to us. They feed on caterpillars and other insects, along with nectar and honeydew. This high-protein diet is fed to the larvae as they grow.

Where Do You Find Them?
Paper wasps prefer to build their nests from tree branches and overhangs, such as eaves or windowsills. The paper wasps will usually only use a nest for one season.

Indoors
Paper wasps are rarely found in homes. Only inseminated queens needing a warm place to spend the winter seek the indoors. Wasps will find a way in through crevices and skylights, or exposed flashing. These paper wasps are not defending a nest, so if you come upon one, stinging usually will not occur.

What Do The Nests Look Like?
Striped paper wasps build their nests out of a paper-like substance. These nests are quite complex.

They consist of a number of exposed cells, or combs, that hang in an umbrella shape. This shape is suspended on a long pedicel, which aids in the protection of the nest against predators, like ants. Read more about paper wasp nests.

Nest Removal
If nest building occurs too close to human activity, it can become a problem. Seek help from a pest control professional before you attempt to remove a nest.

Are They Dangerous?
Striped paper wasps are non-aggressive. They are different from other wasp species because they are semi-social. They exist in smaller colonies, and often will have more than one queen who helps with nest building and egg production.

Beneficial
Striped paper wasps are beneficial insects. They eat caterpillars and other pests.

Eggs
Like other wasp species, a queen who has survived the winter starts the paper wasp nest. The paper wasp queen creates cells in the nest in which she lays her eggs.

Larvae
The queen will care for the larvae until they emerge as workers. She will then relinquish her duties of feeding and nest building, and concentrate on laying eggs.

Reproduction
Paper wasp queens that are newly hatched will fly off with males in the late summer. They will mate, and the inseminated queens will hibernate over the winter.

Colony Life Span
The old colony will completely die off in the fall. When spring arrives, the queens will appear to rebuild their nests and start a new colony.