Size
Average sizes ranges from half an inch up to a full inch in length.

Stingers
Both blue and black and yellow mud daubers have stingers used as a defense mechanism when threatened.

The nomenclature “mud dauber” belongs to several species of wasps found throughout the world, including Sceliphron caementarium, or the black and yellow wasp, and Chalybion californicum, often referred to as the blue mud wasp. Both species reside in areas across the US, although the black and yellow wasp remains more prevalent and widespread. The insect is characterized by nesting habits that incorporate mud-based domiciles. The unusual body type of the mud dauber also stands out among other species of wasps. Areas featuring vast rural and metropolitan settings in temperate climates prove ideal for the wasp. However, the dense populations often lead to conflict between the insect and humans or other animals.

Where Do They Live?
Black and yellow mud dauber wasps and blue mud daubers vary in habitation trends in one key characteristic.

Black & Yellow Mud Dauber Nest
The black and yellow mud dauber remains infamous for constructing nests out of dirt collected from nearby sources. Building overhangs, eaves, bridge undercarriages, and other areas the insect can nestle away serve as ideal breeding grounds. Their mud chambers look more like someone just took a blob of mud and threw it against the wall. In the western U.S. this common species will frequently place the mud nests onto the sides and eaves of homes, or just about anyplace else that’s convenient and relatively undisturbed.

The nests of black and yellow mud daubers are typically rounded or globe-like and feature side-by-side or transverse honeycomb cells. The cells serve as storage for food sources rounded up by the wasp to feed to young larvae or pupae housed inside. 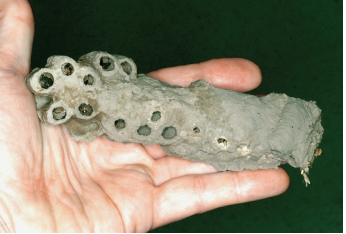 Blue Mud Dauber Nests
Blue mud daubers, in contrast to the black and yellow species, do not build nests of their own but inhabit nests built by other wasp species. Both types of wasp may be found in warm regions and remain most active during sunlit hours.

Nest Removal Concerns
The main issue with the mud daubers is this messy blob of mud that they insist on sticking onto our clean homes. When you find them though, understand that all the larvae living within the chambers in that mud blob have been feasting on spiders that the adult wasp found around your home, and you may then appreciate the benefit they provide. If you still want to remove them you should do so with a stick or putty knife, simply knocking the mud off the surface and disposing of it. You may even consider relocating it to some place in the yard, to allow these beneficial wasps to possibly complete their development and continue to control your spider population. What you should NOT do is to spray the mud nest with any kind of insecticide. Not only will this do no better than just physically removing it, but a liquid spray is likely to cause the mud to disintegrate and cause an even bigger mess on the wall.

Will They Sting?
Incidents of mud dauber stings are rare, and the insect regularly remains passive when threatened.

What Food Do They Eat?
Mud daubers are a highly parasitic insect that sting prey in order to render the food source paralyzed for later consumption.

Adults feed on the nectar produced by flowers, although sparingly. Most food consumption by mud daubers takes place during the early stages of life.

Eggs
Female mud daubers lay eggs individually into each cell in the nest and then place food enough for each larva to eat inside and plug the hole with mud.

Larvae
The cell will remain closed until the newly hatched mud dauber breaks free from the cell after feeding and going through larval and pupal stages. Some species of mud daubers protect youth with male “guards.” They largely aid the young through continued provision of sustenance. The larvae of mud daubers are legless and white in color and resemble white worms or maggots. Mud daubers may produce two generations annually.

The habits of mud daubers rarely affect day-to-day human actions. Problems may arise due to contact with the insect near homes, as the wasps do sting if agitated enough. Mud dauber wasps actually serve as a great population control for many species of spiders, including highly venomous black widow spiders.

The most visible signs of mud dauber infestations include frequent spotting of the insect in or around eaves and overhangs. Home and business owners might also physically see mud dauber nests in the open. The wasps often cluster or swarm during inclement weather and at night, which may prove more identifiable than the behavior of one or two individual mud daubers.

Regular inspections of homes or businesses, especially those with overhangs or many eaves, may prevent infestations of mud daubers. In extreme cases, contacting a local pest control company may prove necessary. However, homeowners should take into consideration the control of spider populations the wasps provide before using professional services or taking personal extermination measures. Sometimes moving the nest to a more desirable location away from human contact proves an acceptable measure of prevention and infestation control.