Ground wasps prevalent in the United States include the cicada killer (sphecius speciosus) and the great black wasp (sphex pensylvanicus). 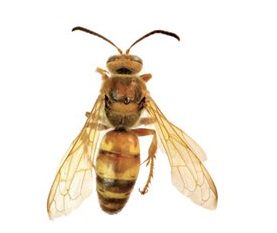 Size (How Big)
The cicada killer may grow up to two inches in length.

Color
It is distinguishable by its rust-colored wings and thorax. The abdomen has black and yellow markings.

Body
Larger than many other species of wasps, the cicada killer may appear more threatening than it is. While both males and females possess stingers, males are incapable of stinging.

Size (How Big)
At nearly one and a half inches in length, the great black wasp lives up to its sizable name.

Color
Somewhat shiny black in coloration, the great black wasp has bristly legs and black wings that fold flat over the abdomen.

Body
Adorned with heavy-duty mandibles that allow for firmly holding onto prey, the wasp also has the typical narrow “waist” found in most wasp species.

Where Do They Live?
Both insects utilize similar nesting characteristics and are solitary species, meaning the queen tends to build nests without the support of an established colony. The wasps are characterized by nesting habits that utilize ground-based dwellings.

Cicada killers dig tunnels in open areas such as lawns and pastures, while areas with workable soils are favored. Tunnel entrances are noticeable due to a mound of excavated dirt that surrounds the opening. Once fully developed, new female cicada killers may live up to a month but still produce tunnels reaching up to four feet in length, all in a single nest. A nest containing nine or 10 cells does not prove unusual.

The great black wasp builds nests underground using methods similar to the cicada killer. Both types of wasps tend to be more active during the day, foraging and feeding, while returning to the nest at night to rest.

The most obvious sign of ground wasp infestation relates to the small mounds of excavated dirt above the tunnel entrance. Slight damage to rooting plants in people’s gardens, as well as noticeable damage to lawns and sand-resting synthetic structures, may occur.

What do they eat?
Cicada killers and great black wasps kill their prey with paralyzing stings then carry the food source back to the incubating larvae. Once hatched, cicada killer larvae will consume the entire food source, typically a cicada, hence the name. Within a month, the larvae finish growing, form a protective cocoon, and lie dormant. In spring, they pupate for about a month and then emerge as adults.

The great black wasp attaches eggs to the underside of the prey insect. After hatching, the larval process lasts about 10 days before full-size wasps emerge. Adult wasps feed on other insects for protein early in the nesting season but mostly gain sustenance from fruits and sugars as the season draws to a close.

The cicada killer is a solitary insect. Queens mate then dig the tunnels themselves. After laying eggs in every cell, the wasp fills each cell with a captured and paralyzed cicada for the larva to eat. Once the nest is made and propagated, the queen leaves, never to return.

Like any stinging insect, ground wasps like the great black wasp and cicada killer come into contact with humans from time to time. Both species tend to show aggression while hunting and if the nest is disturbed. Since both the great black wasp and cicada killer nest in the ground in soils, the possibility of damage does occur. If soils in gardens or around patios are loosened by the wasp, plants may not take root and the chance for damage to patios may occur.

Ground nests near homes allow for more chances of interaction and possible stinging.

Controlling Cicada Killers really is best viewed as “discouraging” them, and you can accomplish this by raking over their holes as they try to create them. You may be able to dry out a soil area so that it does not allow the wasp to dig a tunnel, collapsing due to the dryness. Insecticide applications into the holes may be effective, but the use of toxic materials is generally best done by a licensed and trained professional, especially when dealing with wasps. We have similar activity in the soil from a number of other wasp families, and they are given various names such as Digger Wasps, Mason Wasps, Burrowing Wasps, etc. to describe their habits.

Regularly inspect homes or businesses, especially around gardens, lawns, and man-made ground structures. In extreme cases, contacting a local pest control specialist may prove necessary. However, as both species of ground wasps control true pest populations, utilizing professional exterminators or over-the-counter pesticides should probably only be considered in severe circumstances. Consistent watering of garden soils may help move nests, as most ground wasps do not like wet soil. Consistently churning soils to discourage wasps from nesting in these areas may also prove an acceptable prevention technique.