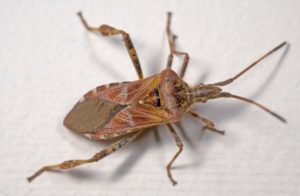 My Home: I am commonly found on crop plants as in turnips, cauliflower, cabbage and fruit trees.

What I eat: I drink the juices from fruits and plants with my piercing mouth parts.

What I look like: I am a type of ‘True Bug’ and go through three stages of development: egg, young adult and adult. My hard case greenish and flattened with a shield shape that is about ¼ to ½ of an inch long. I emit an unpleasant (stinky) smell as a method of defense.

How I am born: The female lays a double row of eggs on stems or leaves in the fall and I hatch in the spring. It takes me about 35 days to become an adult after my egg is laid.

Stink bugs, although largely harmless, nonetheless come with a major drawback – namely the obnoxious odor that they emit when they sense danger or are crushed. While they do not bite, sting or cause damage to your home, the smell brought by these invaders can be very difficult to eliminate…so vacuum carefully!

Native to Asia and introduced near Allentown, PA in the mid-nineties, brown marmorated stink bugs are a growing problem. They are especially prevalent as fall turns to winter, and your home offers the warm, cozy environment they seek. First they hide within your insulated walls. They then creep inside as the temperature sinks, lingering on walls, in curtains or near sources of light.

The best form of stink bug reduction is prevention.

“Shield” shape
Stink bugs are easily recognizable due to their oval shape that is reminiscent of a shield.

Length
The average length of the insect is 5/8 of an inch, and they are typically as wide as they are long.

Wings
Adults have two pairs of wings that appear to have the texture of leather closer to the head, while the posterior part of the wings appear membranous.

Body
Most species have an identifying triangular plate nestled between their forewings known as the scutellum and antennae that are banded with color.

Head
The head, pronotum, and wings of stink bugs often feature colorful and noticeable markings, and the body of the insect may look green to brown in color.

Stink bugs have beaks held between their legs suitable for piercing and sucking. They get their name from the scent glands located on the underside of the thorax and on the surface of the abdomen.

Native to Asia, the brown marmorated stink bug is thought to have been introduced into the United States by accident. Today, the insects live throughout the Mid-Atlantic region and continue to migrate to new areas of the country.

What Do They Eat?
Stink bugs feed on a number of different plants and crops. The insects are major agricultural pests that consume apples, pears, and peaches, as well as field corn and soybeans. Other food sources include tomatoes, lima beans, and green peppers.

The stink bug will also feed on a host of ornamental plants and larger trees, such as maple, birch, and dogwood.

Brown marmorated stink bugs usually only produce a single generation each year, but warmer springs and summers may permit up to three generations of offspring. Adults emerge from overwintering in April or May to mate and lay eggs. Shaped like barrels, the eggs appear white or pale green and are deposited on the underside of the leaves of a host plant.

After hatching, stink bug nymphs go through five instars that cause the developing insects to molt and grow with each one. Each instar takes about a week to complete. Adult stink bugs achieve sexual maturity around two weeks after the final molt.

More about the life cycle.

How to Find Them

Attracted to light as previously mentioned, the stink bug may be found in various places in the home, near light fixtures, in kitchens by appliances, on windowsills, and on walls around doorways.

Why Are They in the Home?
As the weather cools, both species seek to overwinter in order to emerge during the next breeding season. Seeking heat, stink bugs may enter the home through cracks in the foundation, entryways, windows, and other points of egress. Though not harmful to humans or pets, a stink bug infestation may easily occur as the insect tends to group up when seeking warmth.

Actually seeing the insects or smelling the foul odor they produce when disturbed are the most prevalent signs of a stink bug infestation.

As common home invaders, stink bugs may seem to continuously appear. By releasing an aggregation pheromone which attracts other stink bugs to the area, the brown marmorated stink bug remains a persistent pest. Homeowners may notice a stink bug infestation quite quickly.

Killing (crushing) a stink bug does not generally attract others of the species.

Do They Cause Damage?
Although stink bugs will hide in your insulated walls when they first begin to overwinter – the process by which pests seek winter shelter from the cold – they do not cause structural damage. However some stink bugs will feed on garden plants or crops.

Hard to Get Rid Of
However, stink bugs are incredibly persistent. Once inside, they linger well into spring. Worse yet, they emit a chemical aggregation hormone which alerts nearby stink bugs that they’ve found safe harbor from the cold. That means your small indoor population can quickly increase.

The best way to avoid this scenario is prevention. Sealing all points of entry that stink bugs can access is the best way to keep the pests out. Caulk and seal cracks around windows, doors, siding, utility pipes, electrical outlets, and chimneys to help prevent the insects from continuously invading. Replace any damaged screens, as well.

As early as late summer or as late as fall, walk around the perimeter of your house, looking for any crevices or openings in sidings, wood facia, and walls that may serve as entrances to stink bugs. Any hole that’s larger than the diameter of a pencil should be sealed. Inspect door and window frames, ensuring that doors and windows fit tightly. Check if any of your screens – including attic and crawl space air vent screens – are broken, and repair those that need it. Inspect chimneys and drain pipes as well. Finally, trim any vegetation you have around your house, ensuring that no plants touch the walls of your house. It’s best to leave a space ranging from 12 to 20 inches between plants and house.

At times, it may prove difficult to seal off the house completely. In this case, some homeowners opt to call pest professionals to pre-treat their house for them. To get rid of stink bugs at bay, professionals spray house exteriors with pesticides, especially around possible entry points, and apply insect granules for several weeks before the onset of cold weather. However, insecticides are usually not as effective or long-lasting as is a proper sealing of the house.