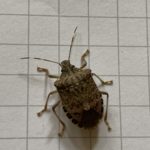 Spring Activity
Overwintering as adults, stink bugs become active in the spring months, when they begin seeking host plants. The pests initially search for host plants near their overwintering sites and prefer to feed on plants that grow reproductive structures like buds, pods, and fruits.

As the feeding season progresses, stink bugs may migrate to other crops or gardens in search of more food. Strong fliers capable of locating host plants from afar, stink bugs can travel sizable distances to find food.

What Do They Like to Eat?
Adult and nymph stink bugs feed on an array of items in the garden, including ornamental plants and flowers as well as plants that bear produce such as apples, peaches, berries, tomatoes, beans, sweet corn, and peppers.

In mature sweet corn, damage appears in individual kernels, which look brown and withered. The visible effects of stink bug attacks make fruits and vegetables unappetizing to home growers and unmarketable for farmers.

A significant agricultural pest in North America, the stink bug can cause significant damage to valuable crops. Apple and peach crops in have experienced severe deceases in yield. In some cases, whole crops can be ruined by stink bug attack.