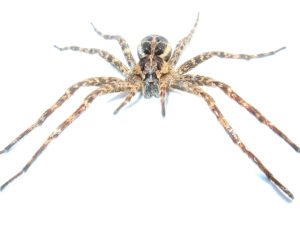 Habitats of wolf spiders are mainly outdoors. They do not build webs to retreat to, but will create a burrow for shelter. They usually dig out a shallow area under a rock or log. Sometimes they create a tunnel that extends into the ground. The spider may leave the burrow entrance open or close it off with silk threads. They may also block the entrance with stones, leaves or sticks, particularly to block out the elements.

Where Else Might You See Them?
Although they are more active at night, wolf spiders are sometimes seen in the daytime as well. They can be spotted running among leaves or in woodpiles, under decks or rocks, or in grassy areas. They hunt for their prey rather than using webs to catch it. They rely on their good vision and speed to catch insects and other kinds of spiders to feed on. Some wolf spiders will wait to ambush unsuspecting prey when it passes by, while others will stalk or chase their prey and pounce on it. Wolf spiders tend to hunt alone rather than in a pack.

Indoor Sightings
Wolf spiders are more commonly found outdoors, but do make their way inside sometimes, especially when searching for prey. If seen, they are most often spotted at ground level. If wolf spiders make their way indoors or are accidentally carried in, they may end up staying. They usually dont bite people.

Cool Weather May Drive Them Inside
Likewise, wolf spiders occasionally go in search of warmer dwelling places as the weather begins to cool off. They can sometimes be found in plants, under furniture, or in basements and garages. Wolf spiders can be located in many regions and climates, except for extremely cold areas.

Dont Hang Out on Webs
Since wolf spiders do not build webs, the females do not attach the egg sac to a web, but rather carry it attached to the underside of her abdomen. Once the spiderlings hatch, they can be seen riding on their mother’s back for several days or a couple of weeks until they disperse by ballooning.