The common house spider is prevalent around the world, and people probably come across this type of spider in their homes more than any other. 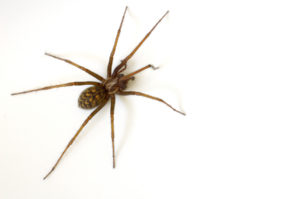 These spiders are not harmful to humans and are really more of a nuisance than anything else, mainly because of their webs, which they will often abandon to build new ones. They do this particularly if they are not able to catch prey in a certain location.

Size
Like many spider species, the female is larger than the male. An adult female’s body measures approximately ¼-inch in length, and it has a very rounded abdomen.

The male, on the other hand, is only about 1/8″ to 1/4″ in body length and bears a more elongated abdomen.

Color
The coloring of these spiders is rather mottled with shades of brown, yellowish, or gray.

Legs
The females have yellowish legs while the males’ legs are more orange in color. The legs have a darker stripe around them where each segment meets. The common house spider has three claws on each leg, and the back pair of legs has bristles on the last segment.

Marking
They bear a herringbone, or v-shaped, type pattern on their abdomens.

Eyes
Like most spiders, the common house spider has eight eyes. There are four in the center (two rows of two) and then a pair on either side that almost touch, similar to the eyes of the black widow.

Common house spiders build their webs in places they won’t be disturbed. They can be found high in corners, in closets, or under furniture. They prefer areas where humidity is higher and where they can locate prey, such as basements, crawl spaces, or garages. Outdoors, they build webs in barns or sheds, and can also be found on eaves or in window frames. They may also been seen near light sources that attract their prey.

They use their webs as a place of retreat, but will also sit in the center to wait for passing prey. The common house spider feeds on insects and flies and can help control annoying pests.

When a female lays eggs, she will construct silky sacs that are usually brown and have a tough, paper-like outer cover. They are generally oval in shape or sometimes resemble a flask. Each sac may contain as many as 250 eggs. Compared to some other species, these eggs hatch rather quickly, in about a week to ten days.

The spiderlings stay in the sac until they molt (shed their skin) one time, then will use their silk to disperse via air currents. This is called ballooning.

The males and females will often occupy the same web and will mate several times.

More info about the life cycle.