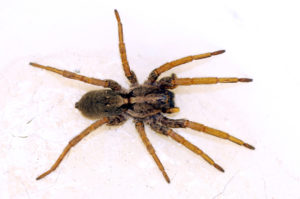 The venom of a brown recluse can result in large, open sores on a victim’s skin that can take a long time to fully heal.

Distribution or Regions of the Country

Generally speaking, the brown recluse inhabits the central and southeastern parts of the United States. Its presence extends roughly from central Iowa to southern Ohio, down to central Georgia, westward through the majority of Texas and back up to mid-Iowa.

Violin Marking
A well-known fact about the brown recluse is that it bears a unique marking on its dorsal side (back) that is in the shape of a fiddle or violin. This distinctive mark is darker than the rest of the spider and can help distinguish the brown recluse from another species.

Color: The brown recluse ranges from golden to tan to brown in color.

More information: What Does a Brown Recluse Spider Look Like?

An adult brown recluse’s body is about ¼” to 0.5″ long. Including its legs, it is about an inch in diameter, sometimes larger. A female brown recluse is usually a little bit bigger than a male. Young brown recluse spiders look quite a bit like the adults except that they are lighter in color and, of course, smaller.

The brown recluse will roam at night in search of food, which is, preferably, live insects or other spiders, as long as they are small. If the spider chooses to dine on larger prey, it prefers that insect or spider to be dead. Also, the males will roam in search of females.

Where Do They Hide?

The brown recluse can be found in lower-traffic areas of a home, such as the basement or attic, and likes to hide in places like storage boxes, linens, and items that are seldom-used. Outdoors, they live in woodpiles, under branches, bark, or other undisturbed and dark areas.

More Information About Where They Live.

I live in a state where the Brown Recluse does occur. How do I prevent it from getting in my house?

If you are in one of the areas where the Brown Recluse can be common you might be wise to call a licensed pest control company for control and prevention. Professional companies have newer materials to use that may not be available on retail store shelves. These newer insecticides offer very low odor and very low toxicity to people and pets, and yet are outstanding for the control of spiders.

Other steps you can take to discourage the presence of spiders and other pests include:

Bites if Disturbed
Although the brown recluse can inflict serious wounds on a human, the fact that it is not actually an aggressive spider may surprise many.

The brown recluse will only bite if it is disturbed or provoked in some way. This can include getting pinned or crushed, such as a person rolling over on it in bed.

If bitten, a person may observe a whitish blister at the bite location, which can become swollen. He or she may experience other symptoms such as fever, joint pain, or nausea. It is possible for a bite to develop into open lesions on the victim’s skin that sometimes become quite large and can take many weeks to heal. In fact, these wounds can sometimes even expose bone or underlying tissue. It is critical to seek medical attention if a person has been bitten.

These spiders may live up to five years.

Traps
Eliminating brown recluse spiders is often done with glueboards or sticky traps, to which the spiders will get stuck. There are also a number of pesticides available to control them. It is best for licensed pest control professionals to handle this. Eliminating a brown recluse population can often mean applying products directly to the spiders.

Treatment
Chemical control also involves treating the outside perimeter of a home. Indoors, a pest control professional would treat corners, baseboards and other seldom-used areas that may provide shelter for the spiders.

IPM
To keep a spider or insect population under control, it is best to use integrated pest management, or IPM. This is a method of not only using chemical control and traps, but also taking non-chemical, preventive measures. This includes eliminating the spiders’ access to a home, getting rid of items that would provide them a place to live, and removing any possible food source, such as insects.

Things You Can Do
For example, a homeowner could use caulk to seal any gaps or crevices that would allow spiders to enter the home. Likewise, they can make sure that window screens fit tightly and do not have holes in them. There are types of outdoor lighting available that are less attractive to insects, which become food for the spiders. For storage, a homeowner could use plastic bags, making sure they are well sealed, and also tape the edges of cardboard boxes so the spiders cannot enter.

It is best to get rid of any piles of trash, wood, rocks, or other items that may provide shelter for the spiders. They can also find shelter in cluttered garages, closets or basements. Vacuuming up egg sacs, webs, and dead insects also helps to control the spider population.

As a precaution, it is wise to shake out linens, shoes, or clothing before using them, especially if they have been in storage for some time. People should use caution when handling storage boxes, as well as firewood, rocks, or other outdoor items that may have provided harborage for the spiders. It is advisable to wear gloves when doing this.