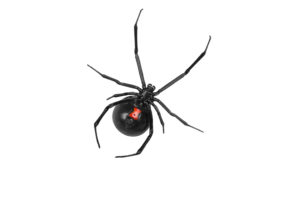 There are a couple of interesting black widow spider facts that may surprise you. For instance, black widow spiders are usually timid and do not aggressively attack unless they have just laid their eggs or are guarding them.

How did the black widow get its name?

Also, contrary to popular belief, the female black widow rarely kills the male after mating. The spider received its name because that was believed to be true in years past.

People are generally fearful of the black widow because of the fact that it is one of the few spiders that pose a threat to humans. The bite of the adult female black widow is of concern, but young black widows and adult males are harmless. Although the black widow is considered to be the most venomous spider in North America, the female injects a rather small amount of venom into its victim, so its bite is rarely fatal to humans.

The female black widow has a distinctive large, shiny, and very rounded abdomen. She is black in color and bears a unique marking on the underside of her abdomen that resembles an hourglass and is usually red, orange, or yellowish in color.

The male black widow is about half the size of the female and can be lighter in color. The males are usually more colorfully patterned, with spots and lines on their dorsal side. In fact, many people would probably not realize that they have seen a black widow when encountering a male because it looks quite different than the female with her well-known and unique design.

A male black widow will recognize a female because of the pheromones in her web. He will enter the web and begin rearranging it while vibrating his abdomen to get the female’s attention. This technique puts her in a trance-like state, and the male will attempt to mate. If he is unsuccessful, he will go back to rearranging the web and try again.

Black widows do not hunt for prey, but spin webs to catch it. These are usually found near ground level in secluded areas, such as under rocks, boards, hollow logs, or behind bushes. The black widow mostly feeds on insects.