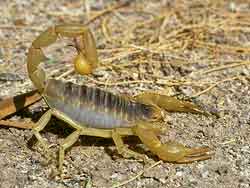 Size: Depending on the species, scorpions typically measure between 1/2 and 8 inches in length. The Southern devil scorpion, which is often found in Virginia only grows as long as 3 inches.

Characteristics: All scorpions have 8 legs, a pair of pincers and a tail that stretches up and over the body with a stinger attached to the end.

Known and feared for their painful, poisonous sting, scorpions generally inhabit hot and dry environments, such as deserts and search for prey under the cover of nightfall. Some species however, are found in tropical regions, while a few others in the eastern part of the United States live as far north as Virginia. Even though only a handful of scorpion species are potentially deadly to humans, the venomous arachnids deliver painful stings that can pose severe challenges for children or elderly adults.

FoodWhat Do They Eat?
Scorpions are hunters that stalk their prey. Larger scorpions will eat birds, rats and lizards, while smaller ones prefer easily catchable prey like crickets or other comparably sized insects and spiders.

Unlike other types of arachnids which reproduce by laying eggs, scorpions give birth to live young. Newborn scorpions cling to the back of their mother immediately after birth. The mother scorpion can hold anywhere from 20 to 40 offspring. As they grow, scorpions shed their skin by molting and abandon their initial family unit to lead solitary lives within weeks of being born. If given the chance, female scorpions will sometimes eat their male partners upon completion of the mating process.

The problem most associated with scorpions is their sting, though the arachnids only deploy the painful defense mechanism against humans when they feel threatened. While some species are deadly, only one type of scorpion in the U.S. carries venom that can actually pose danger to humans. Scorpions like the Southern devil possess venom but cannot inflict significant harm on any animal larger than themselves.

A scorpion sting results in sharp pain near the affected area which lasts up to 20 minutes depending on the age of the victim and the amount of venom in the bloodstream. People with compromised immune systems generally experience more severe reactions.

Scorpions often scurry about in reaction to their hiding places being disturbed. Moving furniture and rustling clothes stored in dark places may therefore increase the chance for a scorpion encounter. Homeowners and residents should expect to spot scorpions more often during the nighttime hours as the arachnids lose moisture easily in sunlight.

Dousing an area alongside an infested house with water, placing a large piece of cardboard over the moistened spot and anchoring it to the ground with a rock offers a good indication of the number of scorpions in the vicinity. Because the method creates ideal conditions for scorpions, check under the cardboard after a few days, and remember to wear gloves, boots and long sleeves to protect against potential stings.

As with any pest, sealing accessible points of entry is the first step to preventing unwanted intruders. Scorpions often find entryways near doors and cables or piping leading into homes. Removing any possible hiding spots also makes the home less attractive by eliminating places where scorpions like to take refuge. Additionally, prevent scorpion prey from entering or coming near the home to further discourage the predatory arachnids from becoming established.

How to Get Rid of Them
Place sticky traps along the edges of walls and under popular hiding places such as furniture. Pesticides may also be used around the home; however, administering the correct dosage and handling the necessary equipment properly often proves much easier for pest control professionals. As some states restrict the use of toxic chemicals, calling a local pest control service is the best option for handling a scorpion infestation safely and lawfully