These pests get their name from their tendency to nest in high places, but you may not just find these 8-inch long creatures in your attic; they are also known to thrive in basement environments. There are serious health threats associated with having rats in your home, including dust-carrying Hantavirus, a deadly disease that is transmitted through their urine and droppings. Rats also pose serious threats to your pets including fleas and mites that they carry and bites if your pet finds them before you do. 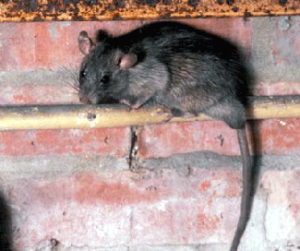 Color: Brown with black mixed in, to gray, to black on top with white; gray or black underside.

Probably from southeast Asia, but now found around the world. In the U.S. Rattus rattus is most common in coastal and southern states, especially near seaports.

Roof rats eat almost anything, but they prefer fruit, vegetables, and cereal products. They get their water often from their food. They eat a lot at one time, and will return to that place time after time. If they do not like a food or bait they quickly become shy of it.

Roof rats mature in 2-5 months, and are adults for 9-12 months. Pregnancy takes 3 weeks. Newborns get hair after 1 week, open eyes after about 2 weeks, are weaned at 3-4 weeks. Female has 4-6 litters per year, with 6-8 young per litter. They have keen hearing, smell, taste and touch (long whiskers), but bad vision, and are color blind. They are good at running, climbing, jumping, even swimming. They are nocturnal and explore a lot, but are cautious and shy away from new objects.

As scavengers, roof rats destroy the food source as they eat, doing massive damage to farms, livestock, and stored food/products. Roof rats also destroy containers and food-packaging materials, as well as building foundations through burrowing, gnawing, and appropriating for nest-making. Rats, in general, are known vectors of various diseases, and the roof rat is no different. Known diseases roof rats carry include bubonic plague, typhus, and salmonellosis, or food poisoning. The rodent also urinates and defecates on foodstuffs, further contaminating materials for human consumption. Additionally, rats may carry fleas and other internal and external parasites that could lead to cross-contamination between humans and pets.

As roof rats generally stay off the ground with the inclination to climb, smudge marks along rafters and ceiling joists are usually the first signs of an infestation. The smudge marks are a direct result of dirt and oil found in rat fur, which leave a trail when a rat rubs against the wood. Finding droppings, urine marks, and actual tracks may pose an issue, since roof rats tend to move around high up, though homeowners may still locate such signs. One of the best indications as to whether or not the home or business may face an infestation lies in sound, as scurrying noises in the attic or beams at night may indicate the presence of roof rats.

To avoid infestation, sanitation measures must occur continuously. Reduce available shelter and food sources, fill gaps in foundations, walls, and attics, and consistently gather and store garbage in containers with secure lids. Ensure that all screens, windows, and doors fit securely and that all vegetation that may provide access to the home/building remains trimmed and does not overhang roof or eave access. The best line of defense for home and business owners remains traps. A variety of options, such as live bait traps, glue boards, electrocution traps, and rodenticide baits, are available at local hardware and big box stores. While trapping may help with roof rat infestation, most store-bought devices require multiple applications in order to fully eliminate pest problems and may become expensive and time-consuming. Also, because rats are vectors of multiple diseases, proper disposal methods must be followed. Contacting professionally trained pest control experts typically alleviates such problems.