This 9-inch long creature is known as the socialite of the rat family. They usually live in groups, which means where there is one, there are likely others. Norway rats produce an average of 20 young per year, so finding a rat in your home is far from a small problem and requires immediate attention. These rats will fight for food, even if it means chewing through plastic. Along with the threat of numbers comes the threat of disease that poses serious health threats to your family and pets. 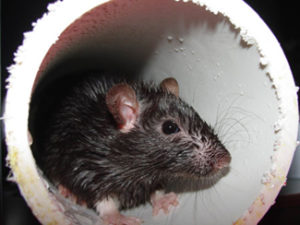 Characteristics: Heavy body; coarse, shaggy fur; blunt muzzle, small eyes, small ears with dense short hairs; scaly, 2-colored tail, which is darker on top, and is shorter than the length of its head and body.

The Norway rat, which is also known as the brown rat, house rat, wharf rat, or sewer rat, is probably from central Asia, but now found around the world, and throughout the U.S.

Norway rats eat anything, but they prefer meat, fish, cereal, and dry dog food. They require a water source other than their food. They eat a lot at one time, returning to the same place, but quickly become shy of undesirable food or bait. They will travel to find food or water, gnawing through almost anything, even plastic or lead pipes.

Norway rats are social. Many burrows may be in the same area. These rats mature in 2-5 months, and live as an adult for 6-12 months, longer in captivity. Pregnancy lasts 3 weeks. Newborns get hair after 1 week, open their eyes in 2 weeks, and are weaned at 3-4 weeks. A female has 3-6 litters per year, 7-8 young per litter, with an average of 20 young weaned per year. They have keen hearing, smell, taste, and touch, with their long whiskers, but poor vision, and are also color blind. They can run, climb, jump, and swim. They are nocturnal, and explore a lot, but they are cautious and shy away from newly introduced objects.

Prolific breeders, Norway rats mate throughout the year, with periods of increased breeding activity typically occurring during the warmer months. After a gestation period of about three weeks, mated females give birth to litters of eight to 12 offspring. Norway rats are born with closed eyes and hairless bodies. The eyes of newborn Norway rats open after two weeks, which is also the approximate length of time it takes the rodents to grow fur. Weaning takes place at three to four weeks of age, with newly weaned Norway rats leaving the nest about five weeks after birth. The rodents achieve sexual maturity and can begin mating at an age of three or four months. Sexually mature Norway rats retain the ability to breed for two years and produce up to seven litters annually.

The presence of Norway rats poses several threats to people, pets, and property. Norway rats living in indoor environments can spread salmonellosis and contaminate food consumed by humans. The rodents also facilitate the transmission of serious diseases like hantavirus, jaundice, plague, and rat bite fever. Norway rats frequently serve as host animals for fleas and lice, as well. Property damage occurs when the pest rodents gnaw through the pipes, wiring, furnishings, and foundations of homes. In fact, rats are estimated to cause an annual total of roughly $1 billion in property damage across the United States.

Wary of strangers and nocturnal by nature, Norway rats tend to remain out of sight during daytime hours. Nevertheless, the rodents often leave behind telltale signs of their presence. Evidence of a Norway rat infestation includes droppings, which typically measure between one-half and three-fourths of an inch long. The gnawing rodents may also leave holes or teeth marks in objects made of plaster, plastic, soft metal, and wood. Other indicators of an infestation include footprints and runways created by the tendency of Norway rats to travel the same path when outside the nest. Norway rats living within wall voids often produce audible squeaking noises and gnawing sounds.

Residents can prevent Norway rat infestations by storing food securely, cleaning up spills thoroughly, disposing garbage properly, and removing piles of debris from around their home or building. Homeowners should also seal any holes around and keep outdoor vegetation away from the structural foundation of indoor structures to eliminte cover/harborage for foraging Norway rats. Severe infestations often prove difficult to handle and frequently require the services of a pest control professional with experience in dealing with Norway rats.