There is a letter that no parent wants their child to bring home from school, and yet they are necessary on a regular basis. “This is to inform you that one or more children at your school has been diagnosed with Head Lice”. Many school districts around the country, especially in day care centers or elementary schools, are confronted with outbreaks of head lice each year.

How Lice Spread
These annoying little bloodsuckers are most easily spread among children who share clothing, hats, or very close contact in these classroom settings, and getting rid of them can be a challenge. They are not particular about who they infest, and children in schools in the suburbs are just as likely to encounter them as those in schools located in inner city areas. Head lice make no distinction between races, sexes, or economic classes of people. The head louse evolved with humans, and it is simply an unfortunate, somewhat uncommon circumstance we deal with.

The presence of head lice, or even the other kinds of human lice, may lead misinformed people to jump to false conclusions about how those lice were obtained by that child. However, as some prestigious universities will state in their information on these lice, these insects are not necessarily present due to neglect, unsanitary living conditions, or any kind of abuse.

They also recommend that the simple presence of head lice or their eggs in the hair of a child is not cause for immediately quarantining that child and sending him or her home. Parents may be shocked by the discovery of head lice on their child, and seek to place blame somewhere – on another person or on the school in general – and this also serves no useful purpose. The goal is to eliminate the problem from your child and ensure the school has appropriate policies in place to deal with such issues. 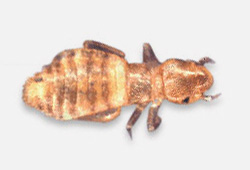 There are two other species of blood-feeding lice that are found on humans, and we will cover all of these in this article, offering some tips on control and the expectations you should have in a control program. There also are many other kinds of lice. One misnomer, though, is a tiny insect we call a “book louse”. It is not actually a louse at all, but is more properly called a Psocid, and it is a tiny, light tan colored insect that is associated with dampness and the bits of mold or mildew that grow on damp surfaces. Its control is best accomplished by drying out the area, or if it is old, damp food products simply disposing of the infested packages.

Lice on Rodents
The other kinds of lice which may (but rarely are) encountered in structures are chewing lice that live on birds or rodents. If you have these animals living in nests in your attics, crawl space, or perhaps nests under the eaves of your home around the exterior, there is a likelihood that those animals have plenty of other little critters living on them, and once the bird or rodent leaves for good its parasites may still be present, may still be hungry, and may begin moving about looking for a new food source in the home. While we can enjoy seeing wildlife around our homes, such as the mud nests of swallows under the eaves of our roof, and while we recognize the value these birds have in eating many insects, it also is a fact that people often are invaded by large numbers of their mites, bedbugs, or lice once the swallows leave. Eliminating the host animals by exclusion techniques is the control here.

But, it is the three human sucking lice we will discuss now, and these are the Head Louse, the Body Louse, and the Pubic Louse. Some other names are used with reference to these three lice and their infestations, and you may not even realize what the reference meant. Body lice are also referred to as “cooties”. Pubic lice are also called “crabs”, due to their strong resemblance to a tiny crab. And, the eggs of head lice are referred to as “nits”, leading to expressions such as nit-wit or nit-picking, to go along with our other common expressions of being “lousy” or “crabby”.

The Head and Pubic lice are currently NOT known to transmit any diseases to humans, so they are not health threats in that way. They are more of a social no-no and a personal irritation, and getting rid of them should be done as soon as possible. The Body Louse, on the other hand, is capable of transmitting a terrible disease called Epidemic Typhus, a disease which used to spread rapidly among soldiers involved in wars and conflicts over the past centuries. It has killed untold millions of humans throughout our history, but has been controlled today due to modern insecticides and better understanding of the disease and its prevention.

The life cycles of these three kinds of lice are of interest, and knowing these helps you to understand the control of the pests themselves. While the Head Louse and Body Louse are essentially identical in appearance they act very differently. The Head Louse female lays her eggs exclusively on the hairs of the host person, while the Body Louse lays her eggs on the clothing the person is wearing. The Head Louse infestation pretty much stays in the hair on the head, while Body Lice are more likely to infest body hairs below the head. The eggs of head lice are nearly always placed on the hair at the base, adjacent to the skin. Even long after the egg has hatched the empty shell remains, and any eggs that are more than ½ inch away from the base of the hair are very likely to be old, already hatched ones. In a normal infestation no more than a dozen lice will be found in the hair of a single person, along with relatively few viable eggs.

The Pubic louse definitely rates as the most distasteful of all these species, for it lays it eggs on the hairs and tends to remain attached to hairs in the groin and nearby areas. In very heavy infestations on a person any of these kinds of lice may move to other areas of the body. All of these lice feed on blood by inserting their piercing mouth into the skin, and after feeding will frequently void their waste materials onto the hairs and skin, creating a rather foul and filthy environment around them.

None of these lice can fly or jump, so their movement from person to person will usually be due to close personal contact. There is some concern that pubic lice could actually move about in crowded locker rooms, and this leads to the suggestion that they could be acquired from a toilet seat, although this has not necessarily been proven actually to occur.

The adult lice live only about one month on their host, and when they are removed from the host the head and pubic lice will die within 12 to 48 hours. The body louse can survive much longer off its human host, possibly lasting up to a week or more. For this reason, and because of the means by which they get from host to host, the control of these lice rarely involves the use of pesticide sprays around the household.
Physicians who diagnose head lice or pubic lice on people commonly recommend that they contact a professional pest control company to come out and spray the house, and this is not a recommendation that the experts in the field of pest control and Public Health agree with. If you or a family member have head lice or pubic lice the control of the problem resides in the use of specific shampoos or other topical medications that will kill the lice on the person, and a thorough cleaning of all household materials that may also harbor the lice. Even if you do nothing but eliminate the lice from yourself, and do not wash or dry clean any bedding or clothing, the lice that may be on those articles will be dead within two days.

This is a difficult proposition to accept, for once you realize the louse infestation exists you become desperate to eliminate it, and when a physician tells you to spray the house you assume it must be done. Pest Control Professionals should refuse to apply pesticides to your home for head or pubic lice, and hopefully you will understand their reasoning now, knowing the life cycle of these two kinds. For body lice though, it is a little different, since they can live for so much longer off the host. In their case all clothing that is likely to have been worn while the lice were present should be thoroughly laundered or dry cleaned, and if dry cleaned the store to which it is taken should be advised of what they are receiving, so they can ensure it is kept separate from other clothing. Bedding and mattresses should be cleaned thoroughly. When these lice feed they feed for a few minutes on the host and then climb back onto the clothing, and they may be placed into closets or drawers along with the clothing that is removed. For body lice a pest management professional may choose to do a treatment of susceptible areas with an appropriate pesticide product.

The lice that infest your hair, or the hair of your child, should be dealt with according to your doctor’s recommendations. One method they may suggest as an aid to removal of the eggs is a “fine toothed comb”, another expression I had only heard in some old popular songs, until I realized its meaning with respect to head lice. This is a comb that has the teeth spaced very close together, offering only a narrow gap to allow perhaps a single strand or two of hair to pass between. Since the eggs of head lice are actually glued to a strand of hair they become difficult to remove by washing or brushing, but a fine-toothed comb is capable of dislodging many or most of them after frequent passes of the comb, expediting the ability to completely eliminate the infestation.

This short article should increase your understanding of these parasites of humans, and give some thoughts on how you need to deal with them when they visit you or your family. It also should help you to understand the reluctance the pest management industry will have in applying a pesticide to the interior of your home for Head Lice or Pubic Lice, even when your physician might have told you it was necessary. Be very careful to avoid any “home remedies” for louse control. There are many “natural” and “organic” products recommended by well intentioned people, but in general these have not been properly tested on humans and their possible harmful effects are not known. Stick with what your doctor prescribes for you. Even immersion in vegetable oils and shampoos is not a guarantee that the lice will be killed, as preliminary studies at Harvard have shown. The use of a hair dryer to kill the lice and their eggs with heat also is an unproven method with the potential for harm to the skin or hair if it is over-used.