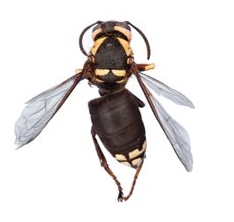 Size: Workers range in length from about 1/2 to 3/4 inches, while queens are usually a bit larger.

Color: Mostly black in color, the baldfaced hornet is noted for the white or cream-colored markings that appear on both the face and thorax.

Characteristics: Often confused with species of true hornets, the baldfaced hornet performs a valuable service in the environment by eliminating many other types of pest insects. Aggressive in nature, particularly when it comes to protecting the nest, the wasp can pose a threat to humans, especially those with relevant allergies.

Technically a species of wasps, baldfaced hornets live throughout the contiguous United States. The insects are classified as aerial yellow jackets because they build aboveground nests either in foliage or against the sides of structures. Baldfaced hornet nests are recognizable due to their football-like shape and gray, papery appearance.

The baldfaced hornet is found all through the United States and also in Canada.

Baldfaced hornets most notably feed on nectar, fruit juices, and even other insects. Workers prey on flies, spiders, and caterpillars, which are chewed up and fed to growing larvae.


Built from scratch each year, the nest of the baldfaced hornet begins with the emergence of a new queen in the early spring. The queen lays eggs, feeds the newborn larvae, and continues to build the nest until the larvae reach maturity and take over as workers.

During the summer months, the population continues to grow, sometimes reaching as many as 700 adults in a single nest, until newly produced males and females hatch and mate. New queens then leave the nest to overwinter, while the males and the rest of the nest die off. Each queen starts a new hive rather than reusing an established nest from previous seasons.

Where Do You Find Them?

Nests
Finding an established nest on or near a manmade structure is the most noticeable sign of a baldfaced hornet infestation. In addition to establishing nests on the siding, shingles, support pillars, and eaves of homes and buildings, baldfaced hornets are often found in trees and shrubbery.

Open trash containers and puddles of spilled juice may attract the flying insects, signaling the existence of a nearby nest. Made from a papery substance and completely enclosed, baldfaced hornet nests are gray in color and similar in size to a football or soccer ball.

While baldfaced hornets help to reduce the populations of unwanted pest species, they can also cause problems that affect humans.

Stings
Notably aggressive, the wasps may attack in response to any type of disturbance to the nest. Allergic persons may suffer anaphylaxis from the sting of the baldfaced hornet, though death is extremely rare. Baldfaced hornets are also considered nuisance pests because of their attraction to trash receptacles and spills.

Seal Openings Around Windows & Doors
Baldfaced hornets can enter homes through cracks in soffits or eves and by taking advantage of other vulnerable areas, such as the openings around electrical conduits and plumbing. Using screens to seal these areas usually helps prevent the insects from entering. Homeowners should also pay attention to and seal the areas around windows and doors, in addition to fixing any holes in the screens as soon as possible.

Notoriously aggressive, baldfaced hornets should not be taken lightly, especially when it comes to the removal of the nest.

Store-bought insecticides can assist in eliminating an extensive nest but may also be only partially effective.

For a particularly extreme infestation of baldfaced hornets, contacting a trained pest management professional may prove both helpful and necessary.