Quick at Reproducing
Common in temperate regions, the house fly often comes into contact with humans by regularly invading homes, farms, and other indoor areas in urban and rural environments. The pervasive presence of house flies stems from the ability of the insects to reproduce more rapidly than other fly species, thus creating large populations of offspring in relatively short periods of time.

House flies achieve sexual maturity and become capable of reproducing within 16 to 24 hours of completing the life cycle and reaching adulthood.

Male vs Female
To attract a mate and begin the reproductive process, the female house fly produces a pheromone called muscalure. While male house flies often breed with many different partners, females typically mate only once.

Consisting of four distinct stages of metamorphosis, the house fly life cycle begins with the laying of fertilized eggs. After a brief gestation period of about 24 hours, newly mated females lay eggs in five or six separate batches over the duration of three or four days.

Where Do They Lay Eggs?
Each batch typically contains between 75 and 200 eggs, which the female house fly deposits in decaying organic matter like accumulated garbage, rotten vegetables, and the feces of humans as well as other animals.

Impact of Weather
In extremely warm temperatures, house fly eggs may hatch in less than eight hours, while cooler weather can extend the incubation period up to two days. On average, though, larvae usually emerge from the eggs within 12 to 24 hours. 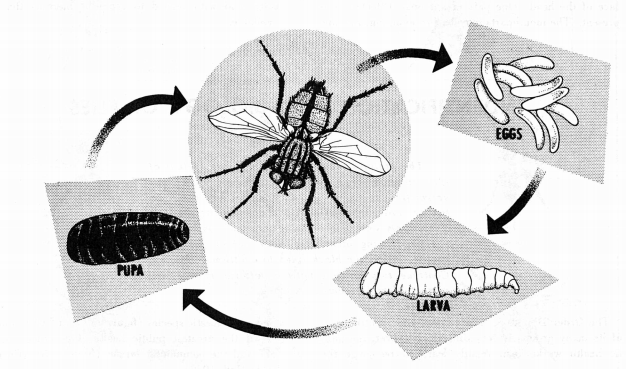 The larval stage of development represents the second phase of the house fly life cycle. Also known as maggots, larvae burrow into and feed on the decaying material upon which the newly hatched insects were deposited as eggs.

Appearance of Maggots
Whitish in color and physically similar to a worm, the body of the house fly larva is tapered and gradually increases in width from front to back. House fly larva develop in size by undergoing three molts or growth stages, called instars. About four to seven days after hatching, larvae typically measure about 3/8 of an inch in length and prepare for the next life cycle phase by refraining from feeding, moving to drier surroundings, and either burrowing or taking shelter beneath protective objects.

Formally known as the pupal stage, the third phase of the house fly life cycle immediately precedes adulthood. Pupae develop into adults within a hard, reddish-brown case/capsule called a puparium.

House flies pupate about three or four days before emerging as fully developed adults with wings. During the colder seasons, however, pupation may take weeks or even months to complete.

How Long is the Life Cycle?
From egg to adult, the entire house fly life cycle finishes within a minimum of seven to 10 days, though most house flies need about three weeks to mature fully after hatching.

Typical Lifespan
The lifespan of adult house flies ranges from two or three weeks during the summer to as long as three months during colder weather.