Compared to other insects, houseflies have a relatively long life expectancy. Outdoors, houseflies can live up to one month. Inside homes or controlled environments such as labs however, they can survive even longer. Like most insects, houseflies follow a predictable basic life cycle that consists of four stages. A housefly begins as an egg and then develops into a larva phase, followed by a pupa stage, and finally adulthood. 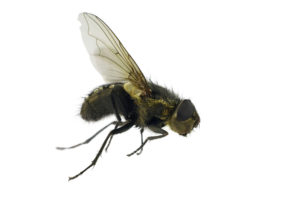 After fertilization by a male, a female housefly lays her eggs in the crevices and corners of decaying organic material such as plant or animal material. At one time, an adult female housefly can lay as many as 250 eggs which are similar in appearance to small white grains of rice. Within 24 hours, these eggs began to hatch into the second part of the life cycle, the larva stage.

Larvae, also known as maggots look like small worms. During this part of the housefly lifecycle, the larvae do little more than eat and grow. As it grows, larvae shed their skin (molt) three times. During this process the larvae is larger and more developed each time it molts. This part of the life cycle generally takes about five days at which point the growing housefly enters the pupa stage.

The pupa stage of the housefly life cycle begins after the larvae have undergone the third molt. At this time, the larvae burrow itself into the substrate it has been feeding on. The outer skin hardens and darkens into a protective shield in which the larvae continue to develop into an adult housefly. During this stage of the life cycle, the growing housefly does not feed.

After three to six days, a fully formed housefly has formed inside the pupa. In order to get out of the hard casing, the housefly expands a fluid filled pouch on the top of its head to break the shell. Once out, the adult housefly’s wings are still damp and soft. Air will soon dry them and as the blood flow increases to the wings they are soon operable.

Within a few days, the adult housefly is able to reproduce. During optimal conditions such as a warm summer, the entire life cycle can be completed within seven to ten days. Each female housefly can lay up to 900 eggs during her lifetime. As a result, it is easy for homeowners to see how an infestation can occur.