As ecologists, we have a love hate relationship with family Tabanidae, or the horse and deer flies. Anyone living in the damp forests of the north-central states can appreciate the misery these flies bring to us, as the female flies, just like mosquitoes, feed on blood. We can call them “horse” or “deer” flies, but human blood is just as acceptable, and in my frequent vacations to northern Wisconsin to visit relatives I have been tormented by them on many occasions. They have a pair of mandibles that act much like scissors, slashing the skin to cause the blood to flow, at which point they lap it up with their mouths. The male flies feed on nectar and other sweet liquids, but the females are biters. The larvae of the Tabanids are another group of predators, feeding on whatever insect larvae they come across in damp soils, in rotting logs, under debris on the soil, or even along the edges of ponds. So, we can thank them for their work as larvae, but wish they’d go away as adults. 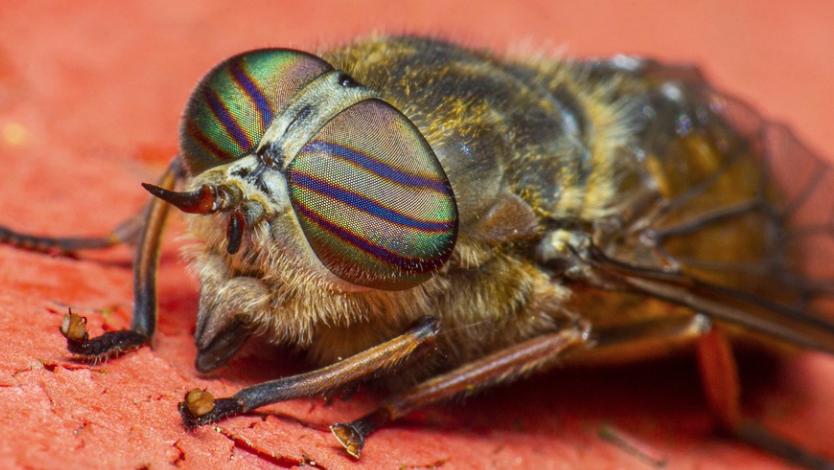 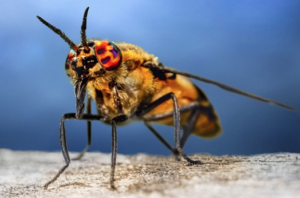 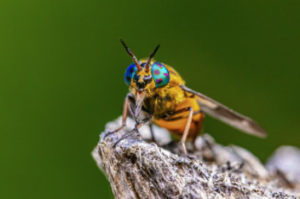 Size: 3/8-inch to more than 1 inch depending on species
Color: Color varies — most are brown or black
Top of Prothorax: May have stripes or markings

Horse flies are generally large flies which are brown or black in color. Many different species might be encountered some of which will be up to one inch or more in length. The eyes of horse flies are very large and are often colorful or iridescent. The mouthparts of these flies are piercing/sucking in design and extend sword-like from the bottom of the head.

Horse flies are biting flies which can and will bite people. Bites can occur on any part of the body and are very painful. The bite of large horse flies can even result in visible, bleeding wounds. Only the adult females bite. The male flies feed on nectar in flowers. Certain species in the Tabanidae family are known to carry and transmit diseases, such as tularemia and anthrax. Fortunately, transmission to humans is rare.

The larvae of these flies develop primarily in aquatic areas and are predaceous on other insects. The adults, therefore, are most common during hot summer months in areas where ponds, lakes, marshes and other wetlands are located.

Horse flies are rarely a significant problem inside structures. These flies are most commonly found inside large, commercial buildings, especially warehouses, where overhead doors are left open to allow ventilation. These flies will be attracted by the cooler air currents emitting from these doorways and will fly to and enter the building. Once inside, a horse fly or deer fly may land on or bite a person working in the building. Bites inside buildings, however, are not very common.

Because infestations of horse flies usually involve only a few individuals, extensive inspections are not necessary. Breeding sites will generally be located a good distance from the building. Should numerous horse flies be found in a particular building, it would be a good idea to survey the area surrounding the structure for possible breeding sites. Ponds, marshes, and lakes within a mile of the building are likely breeding sources.