Found in and around restaurants, homes, bars, fruit markets and other establishments that sell or utilize produce, the fruit fly is a considerable pest throughout the United States. Also known as vinegar or pomace flies, fruit flies feed on the yeasts released by decaying organic matter such as fruits and vegetables. The most prevalent species occurring in the region is the common fruit fly, or Drosophila melanogaster. Fruit flies have been favored by biologists in the study of human genetics for over 100 years, as the insects share 75% of the genes that cause diseases in humans.

Size: Smaller than a housefly, fruit flies generally measure up to 1/8 inches in length, including the wings.
Color: The fruit fly exhibits a yellow to tan thorax, a yellow abdomen and black striping on the dorsal surface of the abdomen. 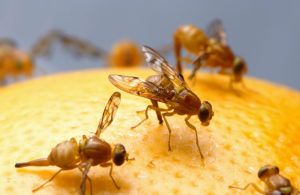 Characteristics: With a single pair of wings on the middle segment of the back, a round head with red or black compound eyes, and short antennae, the fruit fly appears similar to other fly species. While females are moderately larger than males, members of both sexes possess halteres, which enable the insects to remain balanced during flight. Fruit flies can be distinguished from other fly species by the presence of feathery arista on their antennae.

The common fruit fly is found on every continent except Antarctica.

Fruit flies mainly feed on the yeast that forms when fruits and vegetables start to decay. The insects also consume other decaying matter. Preferred food sources include fresh fruits and vegetables, such as tomatoes, bananas and grapes, as well as fermenting liquids, such as beer, cider, vinegar and wine. Adult fruit flies may land in spilled soda and sweet juices to feed as well.

Female fruit flies deposit eggs near the surface of fermenting fruits and vegetables or in poorly sealed containers housing these foods. Hardly visible to the naked eye, the eggs hatch within 30 to 48 hours and produce larvae that emerge to begin feeding immediately. The maggots then pupate after five days and emerge as sexually active adults within another 48 hours. Fruit flies enjoy a lifespan of about 40 or 50 days and have been known to lay up to 500 eggs during that time.

Fruit flies cause irreparable damage to fruits and vegetables. When left unchecked in bars, restaurants, grocery stores and similar businesses, the presence of the pests may lead to the loss of products and profits. Though sometimes regarded as a nuisance pest, the fruit fly can also carry certain disease-causing organisms from coming into contact with excrement, trash receptacles and dumpsters. In rare cases, humans and pets may ingest live larvae which can lead to myiasis and diarrhea.

The fruit fly often enters buildings from compost piles, dumpsters and trash receptacles where produce is disposed. Attracted to uncooked foods and the yeast produced by over-ripened fruits and vegetables, fruit fly infestations can rapidly get out of hand. The presence of quickly decomposing produce attracts the pests and sustains their larvae. Check drains, garbage disposals, trash cans and food storage areas for any visible indications of fruit flies.

Perhaps the best way to help eliminate fruit fly infestations is to remove anything that attracts the insects. Leaving produce unsupervised and uncovered invites the pests to feed and breed. Maintaining proper sanitation of food preparation and storage areas remains critical to keeping fruit flies away. In restaurants and bars, cleaning hard-to-reach areas, such as behind refrigeration units and under stoves where food can collect will also help eliminate attractive breeding sites. Regularly emptying trash cans and recycling bins helps discourage fruit flies from infesting as well.

Home remedies for capturing and eradicating fruit flies include trapping the insects in a jar filled with cider-vinegar or a similar substance, with a paper funnel serving as the lid. Chemicals and store-bought traps may also prove beneficial for smaller infestations. As the fruit fly is quick to reproduce, infestations can rapidly become uncontrollable.

Elimination Can be Tricky
Eliminating fruit flies can be much more of a challenge than preventing them: the only way to get rid of them is to remove or thoroughly clean every possible breeding site. Simply killing the flies that you can see doesn’t eliminate the eggs and the cycle will repeat itself over and over unless you are very thorough. Identifying the source of the new flies can be difficult, especially in an environment where there are a number of potential breeding sites.

Traps can locate and eliminate some fruit flies, but eliminating their development sites is the best control option. Typical development sites include garbage cans, under appliances, in fruit bowls and anywhere else that may harbor even a small bit of organic material.

Wait 1-2 weeks to determine if your efforts were successful. If they weren’t, the flies will reappear with the next hatching cycle and you will need to renew your efforts to identify where they are breeding and eliminate those sources.

In order to deal with a large infestation of fruit flies, it may become necessary to contact a pest control specialist with the training and certification to use chemical insecticides available only to professionals.

Drosophila fruit flies are found all over the world in all types of environments such as deserts, swamps, cities, tropical rainforests, and mountains. Drosophilia consist of over 1500 species and is diverse in behavior, appearance, and breeding. In current literature, Drosophila fruit flies is used interchangeably with Drosophila melanogaster, a popular study species in science.

The genus Drosophila ranges widely in size among the species. While most are around 1/8 of an inch, there are some species that are larger than house flies. Body color ranges from yellow to black, with most having red eyes. Reproduction varies, with some species able to lay 10-20 eggs in one setting and others one able to lay one. After the eggs hatch, the larvae feed on microorganisms and yeast on decaying substrate. Several non-native species have been introduced to new areas when eggs and larvae go unnoticed.

The most well known species of Drosophila fruit flies is D. melanogaster. This particular species has become an invaluable tool to scientists, who have been studying this insect for a century. Genetic heritability is studied in this animal because it has random mutations, such as white eyes or brown wings.

D. melanogaster has a short life cycle of about two weeks, and is able to reproduce quickly in a lab setting which helps to make it a good study subject. Eggs hatch after one day, larvae then molts four times within six days after hatching to form a pupa. An adult Drosophila fruit fly will emerge from the pupa four days later and be fertile the following day. This reproductive cycle has been mapped out constant times in a lab.

Current studies of D. melanogaster are now looking beyond genetics. Recent studies have focused on both developmental and molecular techniques. A valuable member to the science community, in nature D. melanogaster and the other species of Drosophila fruit flies are considered pests in nature. Proper sanitation such as discarding rotting fruit and securing garbage’s is necessary to eradicate them from a home environment.