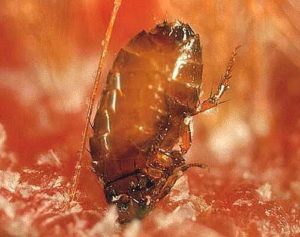 Color: The cat flea ranges in color from dark brown to black and turns reddish-black when engorged with blood.

Characteristics: A sloping forehead and the presence of combs, or ctenidia, on the body help distinguish the cat flea from other flea species. The parasitic insects lack wings and typically leap onto host animals. Cat flea larvae look like maggots with short bristles of hair along the body. 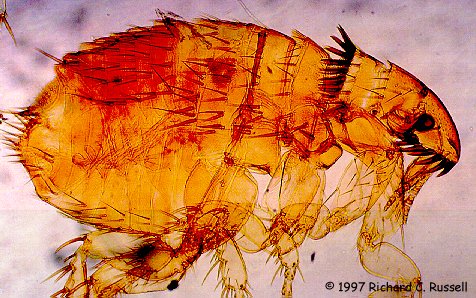 Adult cat fleas feed on the blood of host animals, which range from felines and canines to rabbits, horses, foxes, skunks, and even poultry.

Larvae feed on the excrement of the adults and other debris found in the immediate environment.

How Do They Reproduce?
Female cat fleas, Ctenocephalides felis, have the same basic life cycle as all fleas. An egg stage, a 3 level instar larval stage, pupae stage, and finally adulthood is the life cycle every species of flea undergo. However, unlike most flea species, cat fleas lay their eggs directly on a living host which is typically a dog or cat. Cat fleas can not reproduce on humans.

Eggs
Female cat fleas are capable of laying 20-30 eggs on a suitable host in one day. Each egg is 19/32 of an inch in length which is visible to the human eye. The eggs are transparent when first laid by the female. They gradually darken to a solid white color. When first deposited on the host, the egg is slightly damp which prevents them from dropping off. Within two hours, the eggs have dried and 60% of them have fallen off into the environment. Host activity, grooming, and coat length also play a factor in when the egg is dislodged.

Scientists have discovered that cat fleas deposit fewer eggs at dawn and dusk. Typically, the eggs drop into the environment where pets sleep. Although the eggs will generally hatch within two days, temperature and humidity do influence the larvae emergence time.

Why Do You Need to Understand the Life Cycle?
When dealing with a flea infestation, it is important for the homeowner to treat all stages of the flea life cycle. Flea products containing an insect growth inhibitor are necessary in order to eliminate the egg stage of the cat flea. Eggs generally fall into carpeting, grass, and bedding making them very difficult to see. Vacuuming and washing any pet bedding is an important step in eliminating a flea problem.

What Dangers Do They Pose?

Cat fleas are known carriers of various disease-causing viruses with the potential to create serious health issues for domesticated animals and humans alike. Fleas and flea excrement can induce allergic reactions in both humans and pets, with itchy areas of redness being the most common symptom. The cat flea is a known vector of murine typhus and flea-borne spotted fever, both of which require immediate medical attention. The insects also serve as the intermediate host to the most common species of tapeworms that affect both humans and pets. If swallowed, the tapeworm escapes the flea and latches on to the digestive tract of the new host, causing multiple internal issues.

How Do You Find Them?

How Do I Know If I Have Them?

Perhaps the most common signs of a cat flea infestation are the behavioral changes, such as increased scratching, grooming, and biting at areas of the skin or fur, that affected pets exhibit. When combing domesticated animals, the appearance of flea dirt may also signal an active infestation of cat fleas. Though small in size, fleas remain quite visible when pulling back the fur of cats and dogs, and may also be seen jumping onto the host animal.

How Can I Get Rid f Them?

Once a flea infestation breaks out, completely eliminating the pests from the home is a difficult task. The continual treatment of areas around the home typically proves necessary, as fleas may continue to breed and find new hosts. For extreme infestations, chemical treatments may be required to completely eradicate the pests. When cat flea infestations become severe enough to warrant chemical control, contacting a trained pest control specialist often proves advantageous.