Earwigs get their name from the unfounded superstition that the pests crawl into the ears of sleeping humans in order to bore into the brain. While the insects exhibit no such behavior, they are still prominent household pests throughout the world. Of the 2,000 known species of earwigs worldwide, 22 occupy the United States. Many species have gravitated toward the South, though the common European earwig is found throughout the United States and Canada. 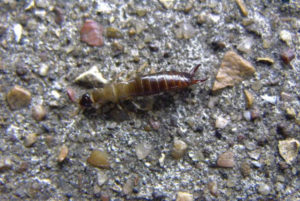 Color: Most species range from brown to black in color, while the common European earwig typically appears reddish-brown with yellow-brown legs.

Characteristics: Earwigs are long, narrow, and flat. Their most notable feature is the forceps-shaped cerci that extend from the abdomen. Males tend to have curved cerci whereas females possess straight cerci.

Drawn to cool, dark, and moist habitats, earwigs are most common in temperate, tropical, and subtropical climates. European earwigs originated in Europe, Western Asia, and Northern Africa. The species has since been carried to Australia, New Zealand, and North America by way of newspaper bundles, luggage, cut flowers, packages, crates of merchandise, lumber, and automobiles. As a result, earwigs are cosmopolitan in distribution.

While the life cycle and mating habits of earwigs vary slightly according to species, the common European earwig offers a fairly clear picture of the reproductive processes that the pests go through in order to procreate. After mating in the late summer or early fall, females lay 30 to 55 eggs, which they gather and store in a shallow hole. Uniquely, the female will then stand guard over the eggs and coat them with a protective layer of saliva.

Depending on the temperature, the eggs hatch within 20 to 70 days. Newly emerging earwigs are called nymphs and undergo four nymphal instars of development. Developing earwigs reach adulthood in August or September, when they become sexually mature and start to mate.

Earwigs nibble on and damage the leaves and flowers of plants. In general, the damage caused by adult earwigs is not enough to kill or seriously harm plant life, but the insects are capable of creating long-term problems related to the health and vitality of vegetation. Additionally, humans tend to find the pests annoying and even frightening or repulsive. Earwigs may emit a foul odor and frequently pilfer supplies of fruits and vegetables.

Due to the nocturnal tendencies of earwigs, smaller infestations may be difficult to detect. The sighting of an adult earwig, on the other hand, serves as an indicator of a sizable home invasion. Additionally, when the insects are crushed or threatened in some way, they will emit a foul odor and a yellow-brown liquid. Thus, the presence of strange odors may point to a large earwig infestation. Furthermore, household plants may be stripped of their leaves, flower petals may appear mostly or completely consumed, and various fruits and vegetables may bear black spots and holes when significant populations of earwigs are living in the vicinity.

Even with the use of screens and other barriers, earwigs prove difficult to keep out of buildings. The pests frequently take refuge and mate under boards, in tree holes and under bark, beneath stones, and the like. As a result, while it is difficult to eliminate all potential nesting sites, removing piles of leaves, grass clippings, and similar debris is a good place to start. To reduce the level of moisture in and around the home, residents should fix leaky pipes and replace poorly positioned downspouts and broken irrigation systems.

Once an infestation has already been established, targeted pesticide applications will need to be used. Pest control professionals may also be contacted for information and assistance if the infestation becomes uncontrollable and large enough to require the application of professional products.