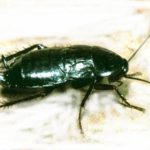 Size
Oriental cockroaches are roughly an inch in length and are the second largest common cockroach (American cockroach is larger).

Legs
Like all species of cockroaches common to the region, the Oriental variety boasts six spiny legs and a pair of long, slender antennae.

Wings
The sex of Oriental cockroaches determines whether the insects have wings; males feature a short pair of wings covering most of the abdomen, while females remain wingless. Despite having wings, male specimens are not known to fly.

Inside
“Water bug” is the other common name for Oriental cockroaches, comes from the tendency of the insects to enter homes and buildings through drains and pipes. Once inside, Oriental cockroaches typically occupy damp, dark areas such as basements and crawl spaces. The insects rarely venture to the upper levels of buildings with multiple floors.

Outside
Highly adaptable, Oriental cockroaches can also live outdoors in places like cisterns, dumpsters, sewers, and piles of firewood, leaves, or mulch. They hide under woodpiles and trashcans. They live under sheds and doghouses. They also live under ivy and ground cover. They even hide in drains and water meter boxes.

Like other cockroach species, Oriental cockroaches hatch from eggs and emerge as nymphs before fully maturing into adults. Adult females produce up to 16 eggs at a time in a protective capsule or egg case, which is deposited on or near a shielded food source. At room temperature, the eggs hatch in roughly two months. Newly hatched Oriental cockroaches live as nymphs for six months to two and a half years. While nymphs grow and develop, they typically molt, or shed their skin, seven to 10 times.

How Long Do They Live?
After developing into adults, Oriental cockroaches usually live for six to twelve months, with females producing an average of roughly 200 eggs in adulthood.

Read more about the life cycles of cockroaches.

They Smell Bad!
Notorious for giving off a pungent and unpleasant odor, Oriental cockroaches also unwittingly spread hazardous bacteria picked up from the unsanitary surfaces on which the insects crawl.

Can Live in Sewage
Oriental cockroaches regularly live in and crawl through sewage and other filth containing disease-causing organisms. When the insects infest homes and other occupied buildings, they frequently transfer the bacteria and viruses from their legs to food, dishes and utensils, countertops, and other objects used and consumed by humans.

Spread Disease
The most common diseases spread by Oriental cockroaches include dysentery and food poisoning.

Granular cockroach bait is an effective tool against these pests. Many brands of bait are water-resistant. They can be used effectively in flowerbeds and ground cover. The bait will have to be applied any time the roaches are active.

A barrier of liquid insecticide is also effective. It helps prevent the roaches from gathering near the foundation. Since sun and rain break down insecticide, the barrier will have to be re-applied periodically.

Rather than fight these cockroaches themselves, many homeowners prefer to get a pest control professional to apply the bait and the insecticide.

How You Can Get Rid of Cockroaches.