Baby cockroaches, or nymphs, make up much of an established German cockroach population. German cockroach nymphs are tiny insects. They are barely visible when they first hatch. Without a magnifying glass, many people would mistake them for something besides a cockroach. 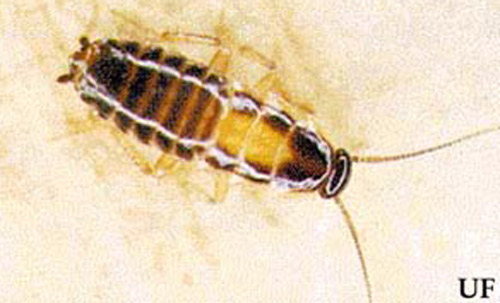 No Wings
The nymphs look like adult German cockroaches except they do not have wings. 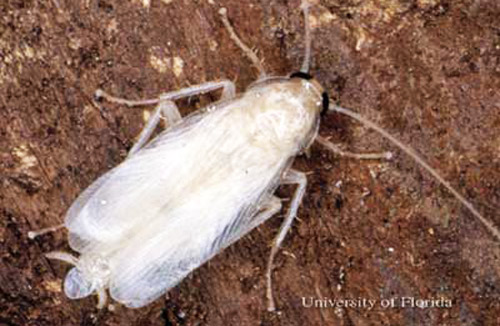 Behavior
German cockroaches avoid light and are usually scared off by human activity (reclusive). However, infestations may be detected well before seeing the pests in the home.

Skins
Molting nymphs leave behind cast skins, which provide a clear sign that cockroaches are breeding and established within the residence. The discarded skins are brittle, reddish shells that look like small cockroaches.

Depending on the environmental conditions, nymphal German cockroaches take between six and 31 weeks to develop into adults. In that time, the adult female may lay several more egg cases. The pests breed continuously, and populations consist largely of varying stages of developing nymphs.

Eggs
The female German cockroach deposits the egg capsule when it is time for the eggs to hatch. Sometimes the nymphs come out of the eggs before she can drop the capsule. The tiny nymphs hide in the crevices where many of them become food for adult roaches. Many of the nymphs survive however. In an infestation of German roaches, more than ¾ of the roaches are nymphs.

For their first few meals, the tiny nymphs often feed on the droppings of the adult roaches.

They May Appear to Be White
The new skin is soft and white for a few hours. The newly molted nymphs look like “albino roaches” until the new skin dries and hardens.

Molting
As they start to grow, the nymphs shed their skin. This shedding is called molting. The average German cockroach nymph molts six times. After each molt, the nymphs look more like adult roaches.

The most effective way to keep baby cockroaches from appearing in the home is to eliminate elements that facilitate cockroach breeding, namely food and clutter.

Food & Kitchen
Discarded food is the major factor that promotes cockroach procreation, and the pests thrive when rotting food is in abundance. To prevent cockroaches from entering and breeding, homeowners want to clean up any crumbs and spills and avoid leaving food and dirty dishes out overnight.

Homeowners should look at the kitchen carefully. If leftover food is left out, roaches will find it at night. If dirty dishes are left on the counter, roaches will dine on the crumbs.

Empty Trash
Pet food should be picked up before going to bed so the roaches do not eat it during the night. The trash should be emptied regularly and it may be necessary to remove the trashcan from under the sink. Bottles and cans should be rinsed before they go into the recycle bin and the bin should be kept outside.

Cleaning Them Up
Heavy roach populations can be removed with a vacuum cleaner. Wrap the vacuum bag in a trash bag and dispose of it outside. Any remaining roaches can be eliminated with cockroach bait. The baiting process can take time. Monitoring will show how the program is working. Several follow-ups are normally necessary. Many homeowners prefer to have a pest control professional take care of this part of the program.