The German cockroach, known by the scientific name Blattella germanica, is one of the most highly adaptable species of insect. It remains one of the most established and well-distributed pests throughout North America. 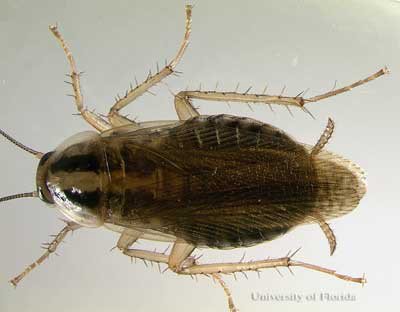 Length
Relatively small in size, German cockroaches typically measure between 3/8 of an inch and half an inch long.

Body
The body features large wings, six legs, two long antennae protruding from the head, and two black stripes just behind the pronotum that run the length of the thorax. Males tend to have skinnier bodies with more defined abdominal and terminal segments, while females boast thicker frames, rounder abdomens, and an extra set of wings.

Where Do They Live?
The United States serves as a prime region for German cockroaches due to extreme population densities, including several major cities, which provide damp and dark living spaces with adequate food sources. The most commonly encountered urban pest, this insect frequently resides in major cities.

Where Do You Find Them?
The German cockroach primarily inhabits indoor spaces, predominantly in urban and suburban areas with dense populations. The pests are commonly found in apartment complexes, hotels, homes, and other commercial/residential structures throughout expanding urban areas. They prefer a warm, humid climate, so they seek out kitchens and bathrooms. Ideal hiding places include areas in or around kitchen cabinets, drawers, and appliances. Moist locations under sinks and around plumbing fixtures also make suitable habitats for German cockroaches.

Come Out at Night
The nocturnal insects spend most of the day well hidden in warm, dark, and damp areas. At night, the pests look for food and suitable mates. They come out briefly at night. As soon as they find food, they eat it and then run back to their hiding place.

Movement
Though the insects possess wings, they do not fly. The pests mate continuously upon reaching the adult stage.

Why Do They Move Around?
Migration patterns usually include moving from building to building, home to home, or room to room within a home. German cockroaches move on as food sources dry up and indoor climates change. The cockroaches may migrate outdoors during warm, humid summer months before finding shelter in a new building or structure once food or adequate shelter is needed.

The insect has three developmental stages which include the egg, nymph, and adult phase.
Eggs

German cockroaches reproduce by egg. Once fertilized by a male, females produce a small sack or capsule which holds between 30 and 50 eggs at a time. The egg capsule remains attached to the abodomen of the female cockroach. A healthy female produces eight capsules during her lifetime. German cockroach eggs hatch within a few days of the egg capsules creation. The insects then go through 6-7 nymphal cycles lasting around 40-125 days, on average, before reaching adulthood. An adult lives from 20 to 30 weeks and produces multiple generations in a single year.

An egg capsule generally appears light brown in appearance, and each female may produce four to eight capsules in a lifetime. The German cockroach breeds continuously, leading to large populations over short periods of time.

Related:
Life Cycle of a Cockroach.

Nymphs
Once the eggs hatch, nymphs appear white in color until the exoskeleton hardens and the color becomes brown. At this point, the nymph looks like a small, wingless adult. Each nymph goes through six or seven growth stages (molts), called instars. This developmental process often takes from six to about 31 weeks for a German cockroach to become an adult (depending on environmental conditions). Most growing populations are made up of larger percentages of nymphs than adults.

How Long Do They Live?
The typical lifespan for a German cockroach ranges from 100 to 150 days for males, while females typically live longer, up to 200 days.

Ways They Can Be Harmful

Food Contamination
The main concern humans face with German cockroach infestations is the risk of food contamination. Cockroaches notoriously congregate in garbage, mold, and other materials potentially hazardous to human health. The pests regularly inhabit kitchens and, due to eating many similar foods as humans, may spread illnesses through unattended foods. More info about what roaches like to eat.

Illness
Gastroenteritis is cited as a common incident related to food contaminated by cockroaches. Other viruses and harmful bacteria may also be transmitted by the insects.

Allergies
Reported cases also exist of allergic reactions to cockroach shells and wastes left behind by the insect.

Smell
The foul odor produced by the insect is also known to change the taste of foods that have come in contact with German cockroaches.

Droppings
Other signs include the presence of feces (looks similar to ground black pepper) as well as the distinctive and offensive odor characteristic of large cockroach populations.

Did You See Them During the Day?
Homeowners who are starting to see German cockroaches in the daytime may have a large problem. The cracks and crevices may be getting overcrowded. The food and water may be hard to find at night. There is a reason that the roaches are being forced out of their comfortable hiding places during the day.

People who are fighting German cockroaches will try almost anything to get rid of the pests. People have been known to use dust on the baseboards, bombs in the cabinets, and chalk in the corners. They become angry and frustrated when the roaches do not disappear.

It is possible to eliminate German cockroaches, but it is not always easy. It can almost never be done in one treatment. In fact, German cockroach elimination usually requires several methods to be done together.

Steps You Can Take Immediately
The first step is sanitation. A vacuum cleaner is a great tool for this step. Use the nozzle to vacuum the roaches out of the cracks and crevices where they hide. Use the vacuum cleaner to remove as many crumbs and food particles as possible. A roach can live for months on one kibble of dog food, so be thorough. Empty the vacuum into a trash bag and dispose of it outside.

Then apply the following:

Maintenance is an important part of German roach elimination. Repair any plumbing leaks and clean up any standing water. Using caulk, seal as many of the cracks and crevices in the kitchen as possible. This will take away the cockroach hiding places, so it may be necessary to vacuum up roaches again.

Treatment is the last step in German roach elimination. Any remaining cockroaches can be eliminated with cockroach bait.

Baits
Any roaches that are still around can be eliminated with cockroach bait.

Bait will have to be re-applied as long as the roaches are eating it. If there are any survivors, they will reproduce quickly and the problem will start all over. Use plenty of bait!

Gel bait can be injected into cracks and crevices. The plastic stations can be placed in corners of cabinet shelves, in drawers, under the sink, and in the motor compartment of the appliances.

Traps
Monitoring tells you how you’re doing. Sticky traps make excellent monitors. They will show where the roaches are still active. These are the areas where the bait needs to be re-applied.

This part of the process can take several weeks, and it requires constant follow-up. Many people prefer to trust the treatment and monitoring parts of the program to pest control professionals.