Water bugs and cockroaches can look a like. So, they are often confused. There are several species of cockroach that people commonly call “waterbugs”.

American Roach
The reddish-brown American roach is often called “waterbug” because it often lives in sewers.

There are several families of insects that are really waterbugs. They are members of the insect order Hemiptera. One of the more common families is the Belostomatidae. These are the giant water bugs. They are also called “Toe Biters”, “Electric Light Bugs” and “Alligator Ticks”. 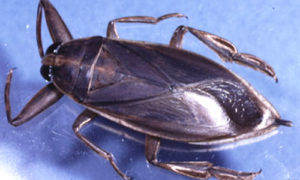 What Are the Differences?

Where They Live
The true waterbugs live in the water. American cockroaches live in humid locations, but they do not go into the water on purpose.

Size & Shape
Waterbugs are large insects. Some can reach 2″ in length. Most giant waterbugs are dark brown or black in color. Their body is rather oval-shaped and fairly flat. Their front legs are adapted for grasping their prey. The back legs look like tiny flippers and are used in swimming.

The American cockroach, is also a large insect. Adults can reach almost 20.5″ in length. They have well developed wings and long, slender legs. They are fairly good fliers and can run very fast.

Diet
The giant waterbugs eat small aquatic animals, minnows, and tadpoles. They inject digestive juice and then extract the liquefied tissue. The waterbugs rest on the bottom of a pond, often by holding onto a rock or stick, and wait for their prey. The adult waterbugs cannot breathe underwater, so they must come to the surface for air.

Like most other cockroaches, American cockroaches are scavengers. Their mouth is adapted for chewing, so they eat solid food. They often eat fermented or decaying organic material.

A male cockroach inseminates a female once and then the female can produce several batches of eggs without mating again. Female cockroaches produce their eggs inside a capsule called an ootheca. When the ootheca is formed, the female American roach deposits it in a warm, humid location and leaves. When the eggs develop, the nymphs come out of the ootheca and begin to search for food.

Bites
They can inflict a painful bite to a human. However, there are no confirmed reports of cockroaches biting humans.

Indoor / Outdoor
True waterbugs only bite people when the people invade their environment. In contrast, American cockroaches, and several other cockroach species, often invade human homes and businesses. They are nuisance pests because they are very persistent.