Home » Pests » Cockroaches » Difference Between a Cockroach and a Palmetto Bug

What is a Palmetto Bug?

People use the name “palmetto bug” in many parts of the United States. The name may be most common in the southeastern states where people actually use the name to describe two different insects – and both of them are cockroaches!

American cockroaches became known as palmetto bugs in the semi-tropical areas where palmetto trees grow. They often climb the trees and hide.

In Florida there is another cockroach that people know as the Palmetto Bug. It is also known as the Florida woods cockroach. Its scientific name is Eurycotis floridana (Walker). 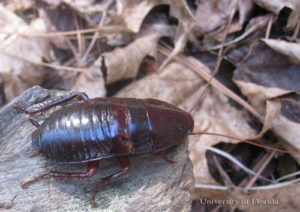 Adult Florida woods cockroaches do not have fully developed wings, so they cannot fly. The wings are short, leaving most of the abdomen exposed. Many people mistake these insects for oriental cockroaches.

The Florida woods cockroach lives outdoors. It hides under the bark of dead trees, in piles of leaves, and under woodpiles. It probably got the name of palmetto bug when people found it hiding under palmetto leaves. Since it cannot fly, it must walk to get into houses. It usually does not survive indoors.

Both “palmetto bugs” – the American cockroach and the Florida woods cockroach – are outdoor insects. Removing their hiding places around the house can discourage them. How to Get Rid of Them.