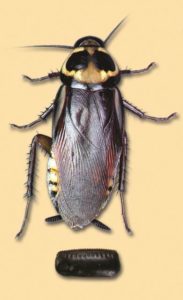 What do Australian cockroaches look like?
Similar in appearance to the American Cockroach, however the Australian cockroach is smaller, measuring between 20 and 35 millimeters. Reddish brown in color, the Australian cockroach features a distinctive bright-yellow border around the pronotum, the area located behind the head. Both male and female specimens have wings that extend slightly past the abdomen. The insects rarely use their wings and only glide from higher to lower points. Nymphs look similar to adults but are smaller and lack wings.

A female Australian cockroach lays an egg case, known as an ootheca, about every 10 days. The ootheca contains between 14 and 24 eggs and takes about a month to incubate. Females typically hide egg cases in crevices of walls or inside moist wood piles. After hatching nymph maturation takes between six and 12 months. Mature Australian cockroaches begin mating within four or five days of reaching adulthood. Adults usually live between one and two years. In a lifetime, one female may produce over 450 offspring.

Homes infested with Australian cockroaches may pose health threats to occupants. The pests can contaminate household surfaces by spreading droppings and bacteria from decaying material they walk through. This can lead to occupants contracting potentially deadly pathogens such as E. coli and salmonella. Areas infested by Australian cockroaches may also take on musty smells due to the pheromones the insects produce.