The American cockroach, or Periplaneta americana, is prevalent throughout the United States. The insects frequently invade homes and other buildings foraging for food supplies, causing infestation problems that can quickly lead to more serious issues. Also known as water bugs or palmetto bugs, American cockroaches can spread bacteria and parasites when permitted to continuously infest homes.

Though not the most common cockroach species found in the region, American cockroaches are perhaps the most recognizable due to their relatively large size. 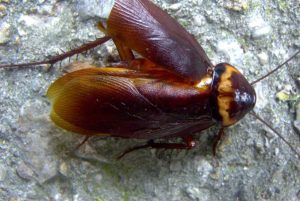 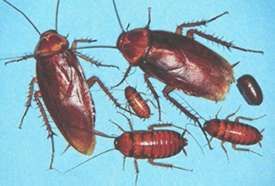 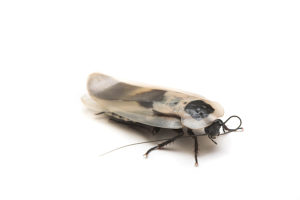 Size
American cockroaches are large insects. Adults can reach almost 20.5″ in length. They look even larger because the male’s wings extend past the end of its abdomen.

Body
With a body that measures up to two inches long, the American cockroach ranks as the largest of all home infesting cockroach species. The bodies of American cockroaches feature reddish-brown or chestnut coloring and are marked by a distinctive yellowish band directly behind the head.

Legs
Three long legs lined with pointy spines extend from each side of the body, while a pair of slender antennae protrude from the head and aid the American cockroach in locating food.

Wings
Adults possess wings which are as long as the length of the abdomen on females, and slightly longer on males. Before reaching adulthood, American cockroach nymphs look like smaller, wingless adults.

What do American cockroaches eat?
Requiring both food and water to survive, American cockroaches feed on a wide range of edible items, including leftover beer or soda, meats and cheeses, grains, and sugar. The insects will also consume paper products, glue, dry pet food, and many other organic materials.

After mating, adult female American cockroaches lay specialized egg cases containing up to 16 eggs. The eggs hatch after about 45 days, at which time nymphs emerge. Upon hatching, American cockroaches live as nymphs for roughly a year before maturing into fully developed adults. The typical lifespan of an adult American cockroach lasts about a year and a half, with females usually producing between six and 14 egg cases during that time period.

Like other structure infesting cockroach species, American cockroaches contaminate food with saliva and fecal matter, leaving behind an unpleasant odor as well. American cockroaches also regularly crawl over decaying matter and sewage, transferring bacteria and viruses to the legs of the insect and further contaminating food and surfaces with which it comes into contact. American cockroaches are known to spread more than 30 different types of bacteria, including pathogens like Escherichia coli (E. coli) and salmonella, and intestinal parasites.

In homes, American cockroaches have often been observed flying when they could launch themselves from a high place. In basements, they often drop from the joists and fly toward windows or doors.

Flying Cockroaches
They Can Run
Besides their flying ability, American cockroaches are surprisingly fast runners. Scientific studies have found that they can pick up their front legs and run on just the very back pair of legs. The cockroaches were able to run at a speed of 50 body lengths per second. The scientists estimated that if a person could match that rate, he would be running more than 200 miles per hour.

How Do They Get Inside?
American cockroaches can run and fly, but they usually enter homes and buildings by walking. They sometimes enter through drains, especially floor drains that are not used.

Make sure exterior doors fit tightly and replace missing weather-stripping. Homes that have crawl spaces should have access doors that close securely. Screens on vents should be repaired.

Insecticide treatments should be made outside. Many granular roach baits are water-resistant. They can be used effectively in flowerbeds and ground cover. Liquid insecticide can be used as a barrier on the foundation. The barrier will have to be re-applied because sun and rain will break it down quickly. Many people prefer to have pest control professionals make these applications.