Cockroaches are some of the oldest insects known. Biologists believe that cockroaches existed 400 million years ago. Cockroaches are not social insect with a hierarchy including king, queen, etc.; however, they typically will aggregate or live with other roaches. 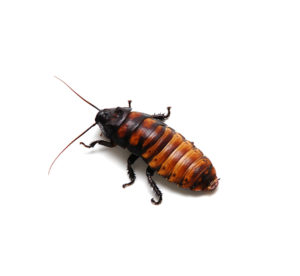 There are approximately 4,000 species of cockroaches worldwide; however, there are only about seventy species found in North America.

Most cockroaches are native to tropical or subtropical areas, but they readily thrive inside dwellings if introduced by humans. This is why cockroaches can be found in very cold climates. Some cockroaches fly.

Perhaps the most common cockroach is the German cockroach. This small brownish cockroach is found in homes, offices, food preparation facilities, and most places where humans are found. These roaches breed quickly which is a reason for their success.

American cockroaches are also common, and are called “palmetto bugs” or “water bugs” in warmer climates.

Besides the German cockroach and the American cockroach, other common cockroaches found in North America include the brown banded cockroach, the smoky brown cockroach which is typically found in mulch before invading homes, the Oriental cockroach, and the woods roaches.

Some of the exotic species may even enter the U. S., such as the Death Head Cockroach, that hitch-hikes in on bananas from South America. Insect zoos commonly maintain colonies of Hissing Cockroaches, those enormous critters that begin “hissing” when you try to pick them up. Many of these species are just not likely to be able to survive in your home, outside their natural environment.

What do they like to eat?
As adaptable creatures cockroaches also will eat just about anything, even, and this is disgusting, the fingernails and hair of sleeping people. These materials are, after all, primarily protein, and that’s pretty nutritious for a cockroach.

But, they don’t limit themselves, so any and all food scraps left in kitchens or other rooms of the house are also treats to the cockroach. They feed on the layers of grease on stoves, chew the labels off cans to get to the glue underneath, feed on spilled juices or milk, crumbs from cookies or sandwiches, dog or cat food left in bowels, uneaten sandwiches in your kids’ backpacks.

Activity
They roam through our cupboards at night, checking carefully to see what packages of food aren’t properly sealed so they can slip inside.

Cockroaches also need moisture, and the one species that is without a doubt the most important of the pest species, the German Cockroach, needs a drink more often than most other kinds. For this reason it usually can be found in its largest numbers in areas of the home where it is close to water – the kitchen and the bathroom. This second location points out why the German Cockroach is so likely to carry around disease organisms, or “pathogens”. Taking a good, long sip of water out of the toilet is not exactly the most sanitary thing a bug can do, and they are well known to be carriers of disease agents such as Staphylococcus, Streptococcus, Salmonella, and E. coli bacteria.

Many studies in the past few years also identify cockroaches, particularly the German Cockroach, as primary causes of allergies and asthma attacks. Children may be especially sensitive to this, and those children who are unfortunate enough to be living around roaches throughout their childhood are most at risk, their immune systems becoming sensitized to the roaches, their feces, and their body parts over many years.

Cockroaches are known carriers of disease and are known to spread disease by cross contaminating food and contact surfaces. Much work has also been done on allergens associated with cockroaches, both when roaches infest an area and after they have been eradicated through shells and other residue. Cockroaches have been closely associated with asthma, particularly in children.

People do not have to suffer with cockroach infestations. Today’s control technology and a clear understanding of the roaches allows the professional to provide thorough inspection and pinpoint control measures using products which regulate the growth of the insects so as to render them sterile. Baits are also used by professionals which are attractive to roaches in the area and the control agent ultimately controls the roaches.