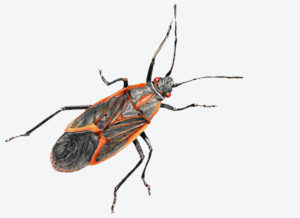 Size: Usually around 1/2 an inch long, the box elder bug is also about 1/3 of an inch wide and flat in appearance.

Color: Distinctive because of the three reddish-orange lines that form an X on the back of the insect when the wings are flat, the box elder bug is otherwise mostly black in color.

Characteristics: Active throughout the summer months, box elders possess piercing/sucking mouthparts that they use for feeding rather than biting humans or other animals in self-defense. The forewings may appear leathery in texture and are rimmed by red markings. Immature nymphs are wingless but, for the most part, resemble adults of the species, if a bit more red.

Eponymously named for their primary plant host, the boxelder tree, box elder bugs feed on a variety of plant life but primarily maple trees. Mainly a nuisance pest to homeowners, the insect becomes an irritant by attempting to overwinter in manmade structures. Even though they regularly seek shelter indoors during the colder months, box elders will not reproduce or feed inside human habitations, despite the common fears of homeowners.

Found as far west as Nevada, the box elder bug occurs throughout the Eastern United States and mainly lives in close relation to populations of boxelder trees.

Made up of a variety of plant sources, the diet of the box elder bug primarily consists of the seeds and fruit of the boxelder tree. The insects also feed on maple trees as well as different fruits, such as apples, pears, peaches, and strawberries. Additionally, box elders have been known to eat dead honey bees.

Eggs are typically laid in the cracks and crevices of boxelder tree bark in the spring. After hatching, the emergent box elder nymphs feed on foliage and seeds by inserting their piercing-sucking mouthparts into the tissue of the seeds of the tree. The developing insects pass through five instars before fully maturing, with two separate generations usually produced each year.

Though box elder bugs do not bite, cause structural damage, or eat human foods when overwintering indoors, the mere presence of the insects may become a true nuisance to homeowners. Avoid squishing the box elder bug, as it may leave an unsightly stain. The feeding habits of the nuisance pests rarely result in significant damage to the host plant, though larger infestations may become more noticeable and feed with more voracity.

When looking for heat, the box elder bug may enter homes as the weather worsens, ostensibly to find shelter and wait for spring. The insects often appear along window sills and around doorways, not to mention additional points of entry to the home, such as foundation cracks and chimneys. Areas of direct sunlight may also become a place of congregation, leading to large numbers of the insect all in one place.

The best course of action to exclude box elders from entering the home is to take preventative measures. This includes, but is not limited to, covering vents, repairing window and door screens, and caulking openings in the foundation and around plumbing, electrical conduits, and windows. Furthermore, any wood piles, overgrown plants, and mulch placed too close to the home may provide hiding places for the pests.

Avoid stepping on or squashing the box elder bug, as the insect may stain carpets, other fabrics, or walls. Simply vacuuming the insect up may prove effective instead. For large-scale box elder infestations, a pest control professional may need to come to the home in order to eliminate the unwelcome visitors completely.

Are Box Elders Surrounding Your House?

If box elders are making their way to your building, here’s what you need to know: