Plaster beetles are also known as mold beetles because they thrive in damp environments. Scientists call them Minute Brown Scavenger Beetles. There are several species. They are members of the beetle family Lathridiidae.

What Do They Look Like?
Plaster beetles are small insects. Adults are usually less than 1/8″ long. 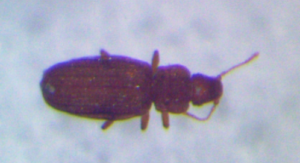 Color
The color can be yellowish brown, reddish brown, or dark brown.

Body
The adult beetle body shape varies according to the species.

Wings
There are several rows of tiny holes on the wing covers. The wing covers stay folded over the back, so it looks like the beetles have perforated backs.

What Do The Eat?
Plaster beetles feed on black mold. In nature, they are found under logs, in stumps, and in decaying material. They are sometimes found in the nests of subterranean termites because they find dampness and mold there.

Where Do They Live?
Members of the beetle family Lathridiidae commonly take residence in the walls of newly plastered buildings, which is why they are colloquially referred to as plaster beetles. These moisture-loving beetles are well known for seeking fungi or moulds growing in wet spaces.

Why do they come into homes?
These beetles invade homes where there has been a moisture problem.

They will move into damp basements and attack moldy items that are being stored.

They will move into attics where the roof has been leaking, or into damp crawl spaces.

Other locations might include bathrooms, under sinks, near air conditioners etc.

Controlling moisture and eliminating mold are the keys to controlling plaster beetles.

Inside and around the home, check for the following:

Insecticides
After the moisture problem has been corrected, it is sometimes necessary to apply insecticide to get rid of plaster beetles. Insecticidal dust can be effective inside walls and in other void spaces. Contact insecticide can be effective for eliminating active adult beetles. A pest control professional will have the products and equipment necessary to make these applications.

Getting Professional Help
Many people find it easier to have a pest control professional make the inspection and find the source of the infestation. He or she can advise if a plumber or any other trades are needed.