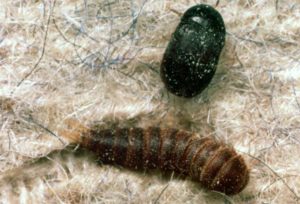 Size
Considered small in comparison to other beetles in the genus Trogoderma, adult carpet beetles range from 3 mm to 5 mm long.

Larvae
Developing larvae are long and carrot-shaped, measuring between 8 mm and 12 mm in length (and appear segmented). Tufts of dark hair give carpet beetle larvae a fuzzy appearance.

Where Do You Find Them?
Common areas to find carpet beetles include behind baseboards, under carpet and rugs, and inside of upholstered furniture and trunks of clothing.

What Attracts Them?
Homeowners may even introduce the pests into the home when bringing in cut flowers. Plants carpet beetles typically reside in include crape myrtle, spiraea, wild carrot, and buckwheat.

The term carpet beetle applies to several species of beetle in the family Dermestidae. The pests earn their name from the destructive habits of the larvae that chew on carpets and rugs. These insects can also ruin clothing, woolens, and linens as well as stored food.

The pests also feed on pet hair or lint that accumulates in corners, under furniture, and inside of air ducts. Larvae may even feed on stored grains. Upon reaching adulthood, carpet beetles strictly eat nectar and pollen.

Carpet beetles mate outdoors during the spring and summer months.

Eggs
The female then looks for a dark place to lay eggs. Undisturbed areas of homes, warehouses, and museums make appealing locations to the insects. Once inside, female carpet beetles look for materials like woolen fabric, carpet, and fur to lay eggs in, so larvae will have food upon hatching. Usually laid 40 to 100 at a time, eggs take between one and three weeks to hatch.

Larva
Once hatched, the insects spend the majority of their lives as larvae. For six months to a year, carpet beetle larvae remain in seclusion feeding on surrounding materials. Once developed, larvae burrow further into food sources to pupate.

Adults
The pupal stage lasts about two weeks, and afterward the insects emerge as adults. The mature carpet beetles then seek light (will move towards windows/try to get outside), as they need to find nutrients from plants to survive.

Often considered museum pests, carpet beetles are particularly troublesome to museums because they threaten the existence of the artifacts. The insects can destroy dried remains, hides, and animal horns.

Just as destructive in the home, carpet beetles devour carpets and rugs, clothing, upholstered furniture, stuffed animals, and pillows. If left unchecked, carpet beetle infestations can lead to excessive damage. Larvae may also cause some individuals to develop allergic reactions like itching and rashes.

Expert hiders, carpet beetles remain difficult to detect. The insects usually dwell deep in fabrics and rugs to avoid light, and signs of their infestations are usually apparent after they have caused some damage.

Skins
Brownish cast skins left behind after molting also indicate carpet beetle activity. Once carpet beetles reach adulthood, they can be seen around windows, doors, and light sources attempting to get outside.

Additionally, moths leave behind a webbing material in fabrics as a result of their development process. The absence of webbing lends toward a carpet beetle infestation. Homeowners also routinely mistakenly identify larval carpet beetles as a potential bed bug infestation.

Good housekeeping remains essential to preventing carpet beetle infestations. Like many pests, carpet beetles can be attracted to foods we eat.

Seal Food
To cut down on food sources for the insects, seal grains and spices into airtight plastic containers and clean up food spills. Unlike other pests, carpet beetles feed on animal furs and lint, and more thorough cleaning is necessary to prevent infestation.

Vacuum
Homeowners may want to vacuum hard-to-reach areas that may accumulate hair and lint like corners, tight spaces between furniture, and underneath rugs and furniture.

Wash Clothes
Eggs and larvae can be extremely hard to detect, but washing or dry cleaning garments ensures elimination of carpet beetles.

If an infestation persists, contact a pest control specialist equipped to solve the problem quickly and sufficiently.