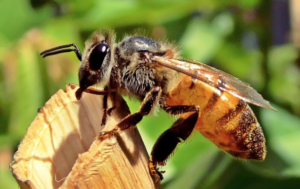 Body
Like other bee species, honey bees have hairy bodies and flattened hind legs, which the insects use to gather and carry pollen. Each honey bee also boasts clear wings and a pair of antennae.

Size
Adult specimens typically measure about a half-inch in length.

Color
They appear black and tan or yellow in color.

Larvae Color
Before reaching adulthood, honey bees pass through a larval stage in which the insects are legless and white. The larvae then pupate into an adult bee.

Members of the Apidae family and the genus Apis, honey bees areone of the most recognized species of all bees.

Benefits
Despite being known, and often feared, for their stinging capabilities, honey bees play a vital role in ensuring the productivity of commercial farms throughout the region. In fact, the insects are responsible for pollinating more than 80%, or roughly $14 billion worth, of food crops in the United States. Most honey bees live in colonies managed by beekeepers and used for pollinating purposes.

Hazards
However, the stinging insects sometimes take up residence in hollow trees or even within the walls of buildings, thereby becoming pests necessitating removal.

Where Do They Live?
Honey bees live in hives made up of layers of wax combs arranged in vertical tiers. Manmade or constructed in sheltered locations like hollow trees and voids in walls, hives can accommodate colonies of up to 50,000 honey bees. The social insects observe a regimented caste system in which a single queen assumes reproductive responsibilities and presides over male drones and female workers. Unlike wasps and certain other bees, honey bees can remain in the nest and survive the cold winters. When hives become overcrowded, newly produced and mated queens leave the colony with roughly half of the workers and fly away in large groups called swarms. Swarms of honey bees typically linger together in the open until a suitable location for a new hive is found.

What do honey bees eat?
With complex mouthparts conducive to extracting essential nutrients from flowers, honey bees feed on nectar for carbohydrates and pollen for protein. The insects carry pollen to the hive in specialized pollen baskets on the hind legs and transport nectar in honey sacs located within the digestive system. Upon returning to the hive, honey bees deposit the pollen in the cells of the combs and regurgitate the nectar, resulting in the addition of an enzyme that converts the fluid into honey. The bees store the honey in designated cells called honeycombs and feed on the sweet liquid throughout the winter. Depending on caste membership, select adult honey bees (workers) take charge of feeding and overseeing the development of larvae.

Eggs
After mating with male drones, honey bee queens lay eggs in the cells of the combs.

Larvae
Within a few days, larvae hatch from the eggs and remain in the cells under the care and supervision of worker bees. When the larvae transition into pupae, workers seal the cells to facilitate the final stage of development. Newly produced queens typically spend about two weeks going through the larval and pupal stages, with their caste status determined by feeding on a specialized diet during the larval-formative phases.

Workers
Drones and workers generally take three weeks or longer to emerge and develop according to whether the egg was fertilized (workers) or left unfertilized (drones) by the current queen.

Damage from Hives
Widely regarded as valuable creatures due to their pollinating abilities, honey bees can nevertheless cause problems when the insects form colonies outside of closely controlled environments. The flying insects sometimes establish hives within hollow trees in residential areas and may even build nests indoors in voids behind walls.

Stings
Though usually docile and mild-mannered, honey bees will defend the hive aggressively to protect the developing larvae and pupae contained within.

Attract Other Pests
In addition to the stinging threat posed by honey bees, indoor hives often present further problems by enticing other pest animals attracted to the honey.

The presence of a beehive and the distinctive combs typically serves as the most obvious sign of a honey bee infestation. Worker bees that gather pollen and nectar and then fly indoors to an unseen location also indicate a potential infestation. Large swarms, while possibly alarming, are not necessarily indicative of an infestation, as the honey bees are often simply in transit to a new nest site.

Preventing honey bees from causing infestations primarily involves the elimination of points at which the insects can enter the home. Residents should cover or seal all openings as small as an eighth of an inch in diameter. Homeowners should also caulk cracks in the foundation, walls, and roof and ensure all window screens fit properly. Bodies of standing water should be covered or removed as well, as honey bees need water to survive. If prevention efforts fail and a honey bee infestation occurs, contact a pest control professional with experience in handling the complexities of removing an active beehive.