What Do Their Nests Look Like?
While this is a common question, you really want to ask what the holes to the next look like. 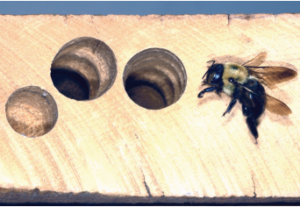 How Do They Make The Nest?
The female carpenter bee makes a 0.5″ hole in the wood. After digging straight for an inch or two, she turns and digs a tunnel that follows the grain of the wood. A new tunnel may be 5″ or 6″ long. Female carpenter bees sometimes use tunnels from previous years. They can extend these tunnels deeper into the wood. Several bees can work together making a tunnel. Scientists have found some of these “group tunnels” that extended more than 10′ into the wood.

Egg Chambers in the Nest
The female bee places a small pile of pollen and nectar at the end of the tunnel and lays an egg on top of the pile. She seals the chamber with some chewed-up wood. After the egg chamber is finished, the female bee makes another egg chamber. She repeats this process until she has made about six egg chambers.

The female bee leaves and abandons the eggs. When they hatch, the larvae develop in about two months. The new adult bees emerge from the tunnels to mate and start the cycle again.

Carpenter bees that develop late in the summer can spend the winter in empty tunnels. They store pollen in the tunnel and then hibernate. In the spring the bees come out of the tunnels and find mates.

Where Do They Make Nests?
They attack siding, house walls, decks, fence posts, picnic tables, telephone poles, and even bridges.

Buildings that are seldom used, like hunting cabins, can sustain extensive damage from carpenter bee tunneling.

There have been reports of wooden water tanks developing leaks due to carpenter bee tunneling. Over time, carpenter bees can cause serious damage. Structures that are not used often, like hunting cabins and vacation homes might be at greater risk than homes in residential neighborhoods.

How to Get Rid of the Nest

After the insecticide treatment, the tunnels should be left open for a few days so the bees that are tunneling can be exposed to the insecticide. After that, the holes can be sealed with caulking or wood dowels.

Homeowners should wait to seal the tunnels for a few days. After the female carpenter bees have had time to crawl through the insecticide in the tunnels, the tunnels can be sealed with wood plugs or caulk. Paint or a similar sealer can help discourage carpenter bees from tunneling into exterior wood.