There are 15 different species of bumble bees distributed throughout the United States. All bumble bee species belong to the genus Bombus and, with the exception of a subgenus known as Cuckoo bees, establish communal colonies that exhibit complex approaches to social organization. Bumble bees are valued for their pollinating abilities. As generalist pollinators, bumble bees provide essential pollination to a wide range of crops and flowering plants. In addition to maintaining natural ecosystems by pollinating hundreds of native plants, the beneficial insects are often used commercially at farms and greenhouses. Despite the valuable functions bumble bees perform, the painful sting of the insects poses a significant hazard when the otherwise harmless creatures set up nests near homes, buildings, or public outdoor areas. 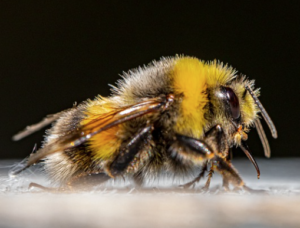 Length
Larger than other bee species, bumble bees typically measure between three-quarters and one inch long. The longer bodies of bumble bees are also noticeably rounder than the bodies of honey bees.

Color
Covered in hair, bumble bees feature stripes of black and either yellow or orange coloration.

Legs
The hind legs of queen and worker bees boast specialized structures called pollen baskets, which the insects use to transport the important source of nourishment back to the nest.

Depending on the particular species, bumble bees may establish nests either above or below ground. The fuzzy insects often convert abandoned rodent burrows into nests. When forming colonies aboveground, bumble bees may seek shelter in tall grass or, especially in residential areas, build nests in abandoned furniture, under porches, and in the foundations, decks, or patio areas of homes. While colonies typically house just a few hundred members, thriving nests can have as many as 2,000 of the stinging insects. Unlike other bee species and insects, bumble bees often emerge in cold, cloudy, or rainy conditions. Their unique ability to thermoregulate allows bumble bees to achieve the minimum body temperature necessary for flight, even in subfreezing temperatures. This rare capability makes bumble bees especially well-suited for survival in cooler, temperate regions.

What do bumble bees eat?
Bumble bees obtain nourishment primarily through consumption of nectar and pollen. Workers collect nectar rich in carbohydrates for the adults of the colony and gather pollen for the protein that facilitates the growth and development of larvae. Equipped with long tongues ideal for extracting nectar and pollen from flowering plants, worker bumble bees typically forage for food most actively between late April and mid-September. As generalist pollinators, bumble bees rarely show a preference for any particular flower or plant and usually stay within a mile of the nest when foraging.

Unlike honey bees, which tend to live through the winter, bumble bees produce just a single colony per year and die in the fall when the weather turns cold. Newly mated queens are the only bumble bees that survive after overwintering, normally under the protection of mulch, loose soil, rotting logs, or other sheltered areas. The queens emerge in the spring to select a new nesting site and lay eggs. Bumble bee eggs take about four days to hatch into larvae. After spending nearly two weeks in the larval stage, undeveloped specimens produce cocoons and develop into pupae. Adults emerge after another two weeks, for a total of about five weeks spent in the various stages of development. Like other species of social bees, all worker bumble bees are female. During the summer months, males hatch from unfertilized eggs, while new queens emerge from specially fertilized eggs. As fall approaches, the males and new queens leave the colony to mate. The newly mated queens prepare to overwinter and restart the cycle in the spring, while the rest of colony, including the old queen, dies when the weather turns colder by late autumn.

Though beneficial for pollinating plants and not as aggressive as wasps, bumble bees occasionally become potentially dangerous pests when the stinging insects establish nests in the vicinity of homes, businesses, and other areas with high levels of foot traffic. Some bumble bee species, especially those with a tendency to live aboveground, display considerable aggression when defending the nest and will chase intruders across substantial distances. Bumble bee stings rank among the more painful of bee stings and can pose serious health problems for people severely allergic to the insects. Furthermore, unlike honey bees, bumble bees are capable of stinging repeatedly.

Bumble bees rarely travel more than a mile in search of food sources. Thus, the presence of the flying insects frequently indicates an infestation in the immediate vicinity, particularly at sites teeming with flowering plants. Locating the active nest is the surest way of identifying an infestation problem. Bumble bees prefer to inhabit dry, protected areas like abandoned rodent burrows, the crevices of rocks or trees, overgrown grass, and the undersides of decks or porches. Since colonies seldom exceed a few hundred members, bumble bee nests are usually smaller in size relative to the nests and hives of wasps and honey bees. Unlike the paper nests of yellow jackets and other wasps, the nests of bumble bees sometimes contain several entrances.

Preventing bumble bees from establishing nests nearby involves the regular inspection and maintenance of potential nesting sites. Since the insects often like to nest in tall grass homeowners and residents should keep yards and vegetation neatly mowed and well-pruned. Mowing the lawn on a regular basis also helps in locating and filling the holes of old rodent burrows, another favorite nesting site of bumble bees. If an infestation problem arises, homeowners should contact a local pest control professional and refrain from handling the issue personally due to the tendency of bumble bees to sting when threatened.