Bed Bug Control Near You

Protect Your Home From Bed Bugs

Although once greatly reduced in developed countries, bed bugs once again present a growing problem to urbanized nations , particularly in densely populated areas. The common bed bug, scientific name, Cimex lectularius L., is prevalent throughout the world but thrives in crowded regions with apartment complexes, hotels, public housing, and other buildings where people sleep collectively. The recent surge in bed bug infestations is largely attributed to the growing popularity and ease of international travel. Other common names for the bed bug include the mahagony flat and red coat. 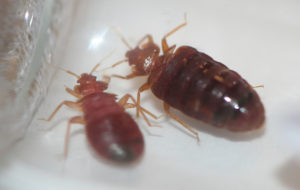 An adult bed bug is small and wingless, with flat, reddish-brown bodies shaped like ovals and measures about 1/5 inch long (7 mm) and 1/8 inch wide (about 4 mm). Bed bug bodies feature three legs on each side and two antennae above a pair of small eyes. Adult specimens are roughly the size of an apple seed, while maturing nymphs are smaller and lighter in color. The parasitic insects expand greatly and turn a reddish color after feeding, a direct result of the blood they consume to survive.

Bed bugs are nocturnal creatures that emerge at night to feed. During the day, the pests take refuge in a variety of places. Small, flat bodies enable the insects to hide in and around bed frames and headboards, box springs, mattress seams, and cracks and crevices in walls and floors. Unable to fly, bed bugs can nonetheless move rapidly across bedroom ceilings, floors, and walls. The insects often hide in briefcases, clothes, luggage, purses, or other objects scattered near beds, making it easy for travelers to unwittingly carry the bugs from one location to another.

Classified as parasites, bed bugs feed exclusively on the blood of humans and other animals, usually at night while the hosts sleep. Though, humans are the preferred host of the common bed bug. The insects boast elongated mouths similar to beaks that puncture the skin of sleeping host animals and extract blood. Bed bugs typically feed for three to 10 minutes at a time. Though typically feeding several nights a week, adult specimens have the ability to survive for a year or longer without eating.

Fully developed female bed bugs can lay between one and five eggs each day and often produce hundreds of eggs over the course of their lives. Difficult to find without intense scrutiny, bed bug eggs are roughly equal in size to specks of dust. Upon hatching, nymphs emerge and develop by molting their skin several times before attaining full maturity. Prior to each molt, nymphs must consume a blood meal. The insects can reach adulthood in as little as a month, with females sometimes producing upwards of three generations of offspring a year. The average lifespan of common bed bugs is about 10 months.

While bed bugs do not typically spread diseases, the parasitic insects cause slight to moderate discomfort by inflicting itchy bite marks as a result of feeding . Bed bug bites are usually painless, rarely waking the host, and result in small red welts similar to mosquito bites. In some cases, the bites inflicted by the pests may cause allergic reactions requiring medical attention. Generally, this reaction is uncommon and the insects are largely considered a nuisance. In addition to bite marks, bed bugs regularly leave other evidence of their presence, including musty odors, rust-colored fecal stains in and around bedding, and layers of skin shed by nymphs. Despite the widespread assumption that bed bug infestations are an indication of poor cleanliness or sanitation in the affected area, bed bugs simply require access to a host and ample hiding space. Bed bugs thrive in a variety of environments ranging from private residences to five-star hotels, and often prove difficult to find and remove completely. Professional extermination is usually recommended to treat infestations.

How to Get Rid of Bed Bugs

Although sanitation is helpful in the control of bed bugs, cleaning and vacuuming alone will not control the problem. Insecticides must be applied after detailed preparations are made, with follow-up inspections and treatments in order to control the problem. Control can take days to weeks, and sometimes longer to achieve. Most pest professionals will schedule a follow up visit to re-inspect and retreat if necessary.

Bed bugs have become a well known pest in recent years. After a period of nearly no bed bug activity in the United States, in the late 1990s, bed bugs began to reappear and are common today. 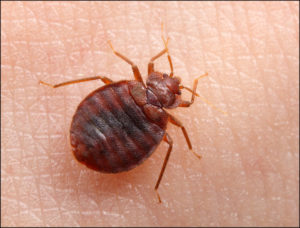 Bed bugs, whose scientific name is Cimex lectularius, are small insects about the size of an apple seed when fully grown, they are typically flat unless recently fed on blood. Eggs and early young stages (nymphs) are very hard to see due to their size. All stages of bed bugs after eggs need blood to progress to the next instar or stage of growth in the life cycle. Both males and females must feed, whereas for mosquitoes, only females feed on blood and this is in order to lay eggs.

Bed bugs cannot fly as they have undeveloped vestigial wings. Bed bugs are excellent hitchhikers in they will crawl into luggage, furniture, transit vehicles, and any other place near humans. Although bed bugs prefer human blood, they will feed on other animals as well if no human food source is available.

The name “bed bug” is somewhat of a misnomer in that bed bugs are found in and near beds perhaps seventy percent of the time, but they will infest any area where there is opportunity near humans. They are found in dormitories, homes, hotels, airplanes, libraries, theaters, offices, and vehicles.  No place where humans frequent are spare the potential for infestation by bed bugs.

Female bed bugs can lay four hundred eggs in her lifetime. Research has shown that bed bugs can survive without blood meals in extreme cases for up to a year and can survive heat and cold well. Approximately thirty percent of humans bitten exhibit no reaction, but in others, bites lead to welts; although bed bugs do not spread disease.

Bed bug control is best left to the professional since bed bugs reproduce quickly and are very difficult to find.