What Kind of Ants Are Red?

Many people use the term “red ants”. They are not all talking about the same type of ants. There are several types of ants that people commonly call “red ants”.

Did You See a Red Ant?
The red harvester ant and the red imported fire ant are two of the most common red ants. 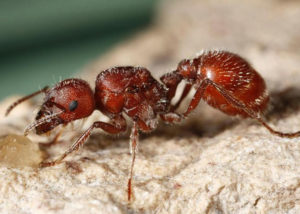 The red harvester ant is a very large ant. The workers can be as large as 0.5″ long.

Its territory extends from Colorado and Kansas south to Texas. It is widespread – from Louisiana westward to Arizona. There are several other species of harvester ant around the U.S. Their color varies from yellow to two-toned to black.

The red harvester ant makes a nest in the ground. The name “harvester ant” comes from the ant’s habit of clearing away all of the grass and vegetation around the nest. There is usually one central opening to the nest. The clearing is as large as 6′ in diameter. There are often small stones and pebbles strewn around on the ground near the nest opening.

Red harvester ants can be destructive pests in lawns, golf courses, and sports fields. When these ants make nests in pastures, they remove a lot of the grass. This can affect the grazing of cattle and other livestock.

The red imported fire ant is native to South America. Scientists think that it came to the U.S. in the cargo hold of ships. It gets its name from the painful bite and sting that it can deliver. It has spread across the southern U.S. from Virginia to the desert southwest.

The workers are very aggressive in defending the nest. The workers of a red imported fire ant colony vary in size from 1/16″ to ¼” in length. The head and mid-section are red and the abdomen is black.

Red imported fire ants nest in the ground. The tunnels can extend deep into the soil. During the day, the workers move the queen and the immature ants up and down in the tunnels as the temperature changes.

The red imported fire ants make their nests in sunny areas. They often make the nest near a driveway, sidewalk, or building foundation. These concrete structures radiate heat during cold weather. In rainy weather the workers often build a mound of soil above the nest. The colony is able to move up into the mound and get out of the damp tunnels. Homeowners discover the mounds and think that the ants have just arrived. In fact, there may be hundreds of colonies per acre.

It is important to make an inspection and identify the type of red ants that are causing the problem before beginning treatment. Incorrect treatment can cause the problem to return and maybe become worse.