Have You Seen Big Red & Black Ants in the House? 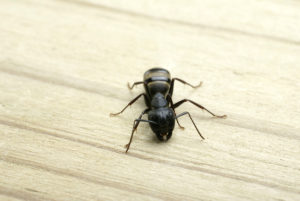 They are most likely carpenter ants. Carpenter ants get their name from their habit of hollowing out wood to make their nests. The ants do not eat the wood, but they can cause considerable damage with their tunneling.

At least six species cause problems for homeowners.

Camponotus pennsylvanicus (DeGeer) This ant is completely black. Its abdomen is covered with yellow hairs. It is common throughout the eastern U.S.

These ants have a fierce bite and for that reason many people call them “bulldog ants”. They are common throughout the southeast, from North Carolina to Mississippi.

Outdoors
Unlike many other species, Florida carpenter ants often nest on the ground. They will nest under rocks, logs, and woodpiles. They will also use piles of leaves or scrap piles as nesting sites. If there are rotting stumps, they will also use them for nesting.

Indoors
Florida carpenter ants frequently invade homes. They will nest inside of walls, under cabinets, and in attics. The Camponotus tortuganus (Emery) is also found in Florida. It has a reddish-brown body and the abdomen is darker. It is found most often in south and central Florida.

There are several red and black carpenter ants in the western United States. The western carpenter ant, Camponotus modoc (Wheeler) is very common. This ant is found in West Texas, New Mexico, and Arizona. This ant has a black body and dark red legs. There are yellow hairs on the abdomen. 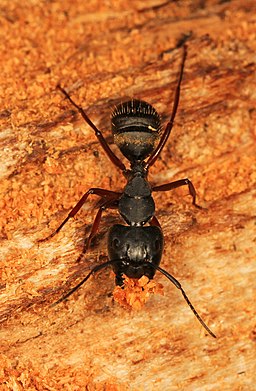 The western carpenter ant is common from Canada to southern California and from the Pacific coast to the Rocky Mountains. The workers can reach 0.5″ in length. The colonies can have as many as 50,00 workers.

Camponotus vicinus (Mayr) is also a red and black carpenter ant in the western United States. This ant has a red mid-section. The rest of the body and the legs are black. 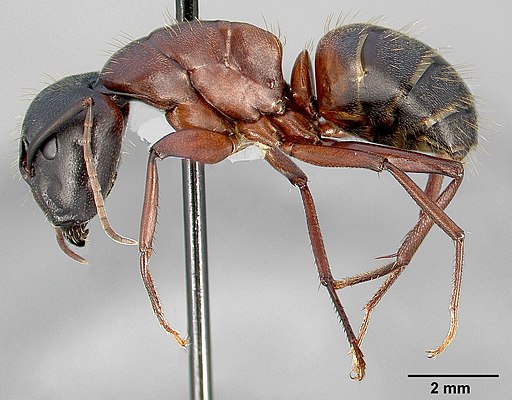 This ant is common from the Pacific to the Dakotas. It is found from Canada to Mexico. Scientists believe that this ant is second only to C. modoc as a structure-infesting carpenter ant. Colonies of this ant are very large, in part because there are multiple queens in each colony.

Camponotus variegates (Fr. Smith) This ant is found in Hawaii. It has also been found in Washington State. It is yellowish brown in color.

The ant that is known as the “red carpenter ant”, Camponotus novaboracensis (Fitch) has a red mid-section but the rest of the body is black. The workers can reach 3/8″ long. The colonies usually have fewer than 5,000 ants. They usually nest in trees and logs, but will also nest under rocks. This ant is found throughout southern Canada and the northern United States. It is common in the northern states and is found westward to Minnesota and North Dakota.

Beside these, there are several other species of red and black carpenter ants. Camponotus herculeanus (L.) has a black body and a red mid-section and legs. It is common in the northern states from the Atlantic to the Pacific. It is common in forested areas and will invade homes readily.