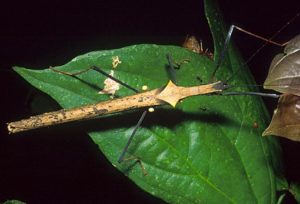 As their Greek name, Phasma suggests, stick insects are truly apparitions – masters of blending in with the foliage.

These large plant feeding insects are generally dormant during the day and active at night. The males or some species develop wings and occasionally fly to lights. These tropical insects are typically stick-like, with their legs spaced far apart on their elongated thorax. They drop their seed-like eggs individually to the ground where the nymphs hatch and crawl back up into the foliage.

Stick insects are considered to be the longest insects reaching over 12 inches in the Pharnacia genus. This Ecuadorian species was clambering around during the day. Notice the spines lining the meso thorax.

In addition to their foliage mimicking defensive strategies, some stick insects are also capable of spraying an irritating concoction from their thorax.

They have also been observed gently swaying as if being buffeted by the breeze. If the intrusion is more direct, stick insect are capable of losing and regenerating leg appendages.

This specimen has lost his right middle leg. They will also drop to the ground and draw their legs together to forming a single elongated stick. If you look closely at the fore femora (front legs) of this winged Ecuadorian male, you will notice a red colored indentation designed to accommodate the thickness of the head when both legs are held forward.

Most female stick insects lack wings and tend to be geographically localized. In some species, this lack of mobility can result in defoliation of the chosen food plants. A number of stick insect species are capable of parthenogenesis; if no males are available to fertilize eggs, viable female offspring will be produced. Males are usually winged which allows for distribution of populations. Males are also know to stay coupled with females for considerable duration to ensure their own genes are responsible for egg fertilization. Some species are capable of altering their coloration. During the day they will appear lighter green, switching to a darker mode for their active nocturnal period. 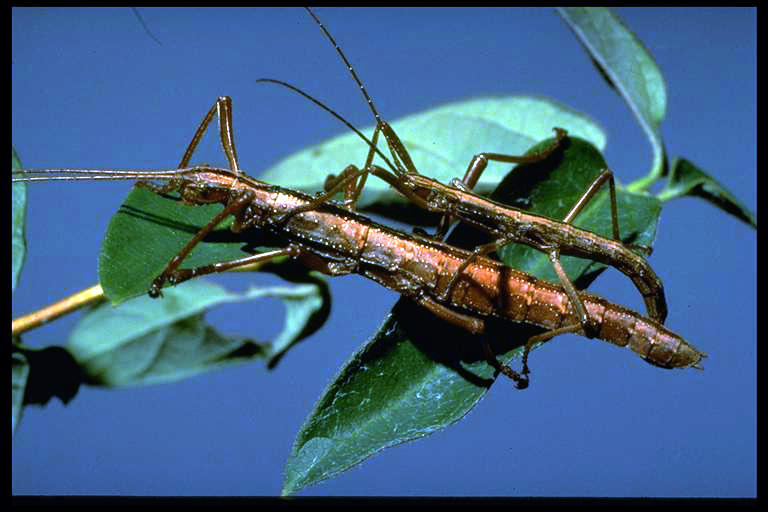