The praying mantis, as it is commonly referred to as, are carnivorous insects that commonly prey on smaller insects and pests. T

here are approximately 2,200 known species of mantises. They can be located in most temperate and tropical habitats all around the world.

Although, there are said to be at least 20 species native to the United States, the most common species found here are the Chinese Mantis (first introduced to the U.S. in the late 1800s) and the Carolina Mantis (native to southern U.S.).

Mantises are known as a beneficial insect (i.e., a natural pest control).

Some gardeners place mantises (or mantis eggs) in their garden to rid unwanted insects and pests. 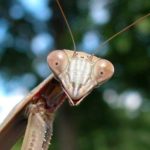 Mantises have quite a few enemies; most commonly, birds. In order to protect themselves, they usually seek areas where they can blend in effectively.

Mantises come in a variety of shapes, colors, and sizes and are usually very well adapted to their surroundings.

Most mantises that are found in the United States are either green or brown to imitate leaves, sticks, or tree bark. There are also species that can be black, white, purple or have colorful wings.

Depending on the species, adult mantises can range from one centimeter up to about six inches in length.

They are often found posing with their two front arms propped up in a manner that looks like they are praying. This position allows them to easily reach out and grab a nearby insect. Read more about characteristics of a mantis » 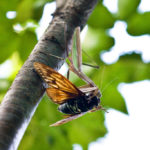 Mantises typically prey on smaller invertebrates such as crickets, beetles, grasshoppers, flies, butterflies, spiders, and during mating or low food supply, will eat each other.

If the opportunity arises, the praying mantises may also attempt to catch small vertebrates such as lizards, tree frogs, and even mice or birds. Prey that is caught is held securely with grasping, spiked fore legs and is decapitated in an effort to quickly paralyze squirming prey. 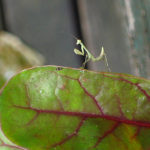 Organic gardeners who avoid pesticides may encourage mantises as a form of biological pest control. Tens of thousands of mantis egg cases are sold each year in some garden stores for this purpose.

During fall, praying mantis females deposit a sticky egg case on the underside of a leaf or on a twig. If the egg case survives winter, the offspring, called nymphs, emerge in late spring or early summer. The nymphs have voracious appetites and typically cannibalize each other if they don’t have an adequate supply of aphids and other small insects. Egg cases are commercially available for placement in landscaping. However, mantises prey on neutral and beneficial insects as well, basically eating anything they can successfully capture and devour.

Praying Mantis as a Pet 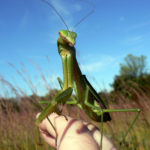 Many people like to keep mantises as pets because of their “cool appearance” and ease of care. Since mantises will eat almost anything you throw at them, you can find food (crickets and grasshoppers) at almost any pet shop or in your backyard. Typically, one cricket a day is enough to keep this pet healthy and happy.

These insects can be a little scared and try to escape the hands of a human, but can quickly become accustomed to handling. The insect is not known to attack humans but can bite or grab in a last effort to defend itself. These insects DO NOT have a venomous bite but the bite is said to be a little shocking and can be temporarily painful. My suggestion would be to keep your fingers away from it’s mouth and wear gloves for added protection. This is not a long term pet since most species will only live up to a year. However, from my personal experience as a kid, I cannot forget the fun memories of watching and caring for my first pet mantis before releasing it into the wild.

The mating season begins in autumn in most temperate climates. After mating, the female is known to eat the male mantis. The reason why is debatable, but many may agree the male mantis is the closest nutrient-rich meal the female needs to ensure her eggs hatch. Soon after mating, the female mantis will lay an egg case (or ootheca) that contains between 10 and 400 eggs, depending on the species. These eggs will soon hatch approximate 3 to 6 months, also depending on the species. The realistic survival rate of these hatchlings is typically between 15% and 25%. Mantises go through three stages of metamorphosis: egg, nymph, and adult. This life span typically is completed during each year.

Some do breed mantises in captivity, however, it can be cumbersome maintaining hundreds or thousands of mantises.

Breeders typically feed new hatchlings wingless fruit flies. If food supply is low, or the habitat is too crowded, they may begin to eat each other.

Only one Spanish species, Apteromantis aptera, is listed as Lower Risk/Near Threatened. With one exception (the ground mantis Litaneutria minor in Canada, where it is rare — though it is common in the United States), North American mantises are not included among threatened or endangered species, though species in other parts of the world are under threat from habitat destruction. The European mantis (Mantis religiosa) is the state insect of Connecticut, but the General Statutes of Connecticut do not list any special protected status, as it is a non-native species from Europe and Africa. 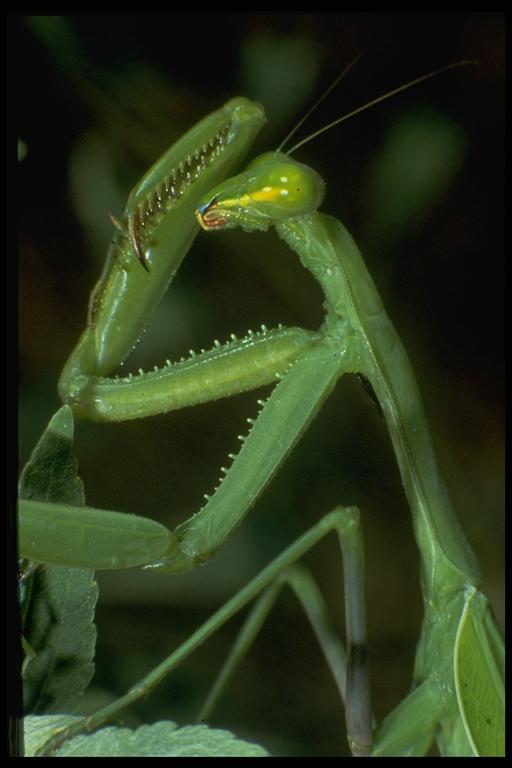