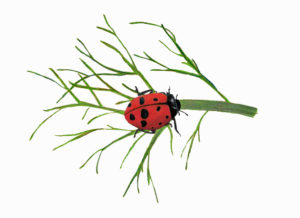 My Home: I am found all over the world and live in a variety of places including gardens, forests, fields and grasslands.

What I look like: I am around ¼ of an inch long and am usually yellow, orange or red with black spots on my wing covers. I also have black legs, head and antennae. The number of black spots I might have will vary by individual ladybug. My black spots will fade as I get older.

How I am born: I go through four stages of development: egg, larva, pupa and adult. My tiny yellow egg is laid on a leaf and will hatch in about a week. When I hatch, I am in a worm like larva stage for almost a month. I finally get strong enough to pupate and become an adult. I can hibernate during the winter and live around one year.

Fun Facts: A ladybug’s wings beat over 80 times a second in flight. Ladybugs will play dead when threatened. In July 1999, four ladybugs were sent into space on NASA’s Columbia space shuttle. You can get the Mission Highlights here

Could there be anything more delightful and helpful to us than our beloved Ladybugs? Every child knows what they are, and without a doubt the vast majority of Americans, at one time or another, has carted one around in our hands to appreciate this friendly little critter that so benefits our garden. Perhaps some of you even have been fortunate enough to have seen the incredible winter gatherings of ladybugs, perhaps in protected canyons in your local hills.

Types of Ladybugs
There are a great many different species of ladybugs in the United States and around the world. While our most familiar kind is the Convergent Ladybird Beetle, a medium sized species with orange wings and black spots on the wings, there is a wonderful variety of sizes and colors in this group. They range in size from the head of a pin to around ½” across. Their colors are from orange to red to black to white. Variations are white with black spots, black with red spots, red with black spots, red with no spots, gray with red head, and others.

Carnivorous Beetles
The “ladybug” is one name for the beetles that are in a family called the Coccinellidae, or “lady bird beetles”. Virtually all of them are carnivores. That is, they eat meat, and that meat is in the form of some of our most reviled garden pests – aphids. Both the larva and the adult of ladybugs feed on aphids, along with other plant pests such as whiteflies, scales, and mealybugs. Several species of ladybugs have been instrumental in stopping major agricultural pests, such as The Vedalia Ladybug that was introduced to control Cottony Cushion Scale in California, essentially saving the Citrus industry from certain destruction.

Larvae
The larvae of ladybird beetles may be even more amazing. The larva is the “baby” ladybug, or the early stage that hatches from the egg. As it grows through its various stages it has an incredible appetite, and crawls all over plants looking for other bugs to eat. Quite often we may see these larvae and not recognize them for what they are – a highly beneficial and desirable visitor to our garden – and, not knowing any better we may kill them. I often am asked what the little bugs are that look like “alligators”, and these are ladybug larvae. They may create their next stage – the pupa – on the wall of your house or the trunk of a tree, and these too should be left alone to live and help us.

One species of ladybug is called “The Mealybug Destroyer” because of its fondness for these ugly plant pests. This ladybug larvae has evolved a very different appearance, very much the same as the mealybugs on which it feeds, and effectively blends in with its food as protection from its own enemies. We need to learn to identify these critters so we can properly deal with insects in the garden.

Can Hibernate Indoors
All insects make it through the winter somehow in cold parts of the country. In warm states, of course, they may simply keep on working and moving about in the outdoors, but where it is cold they will die unless they are able to tuck themselves away somewhere. Ladybird beetles over-winter as adult insects, and often they find the interior of buildings to be ideal places to hide and protect themselves from the killing cold weather. They tend to gather in large masses for this hibernation, so it isn’t just a few beetles that wander into the building walls, it may be many thousands of them massing there.

Now, one of two things can happen from this point on. The beetles may confine themselves to some hidden places, such as wall voids, attics, or false ceiling voids, and exit to the outside when it again warms up in the spring. Or, they may get warmed up sufficiently inside the building to become active, particularly on winter days when a bright sun warms the walls and the air inside, and start crawling around looking for a way out. If that way out happens to be light fixtures on the ceiling, or other openings into a room, the potential is there for large numbers of ladybugs to be flying and crawling around in that room, hitting people, hitting the lights, crawling into food or onto people who are working or being served there.

Let Them Out!
So, just a few thoughts on Ladybird Beetles. If you are one of those plagued by huge numbers of them I can understand the frustration of having them crawling along the back of your neck at the dinner table. However, they are an animal that is better left alive, so keeping them out of the structure is the first step in keeping them from being called “Pests”, and catching and releasing them back outside is the best method of dealing with it if at all possible.