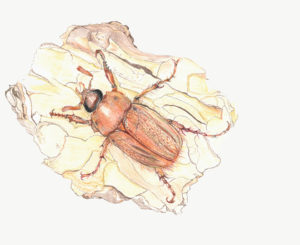 My Home: Found all over North America, I hide in trees during the day. As adult beetles, we swarm in great numbers in early summer, usually at dark and are strongly attracted to lights.

What I eat: As a larva, I live underground and eat the roots of grasses and other plants. As an adult, I feed at night and eat vegetation, usually the leaves from trees and bushes.

What I look like: I am less than one inch in length, am dark brown to blackish in color, have a hard casing and have wings.

How I am born: I go through four stages of development: egg, larva, pupa and adult. My egg is laid in the ground, and I can live for two to three years in the ground as a larva before surfacing to become an adult. My total lifespan is up to four years.

Fun Facts: June bugs get their name from emerging in great quantities in June. These beetles make a tasty food for your pet toads and lizards.

There are two families of beetles, the Scarabs and the Weevils, often found burrowing in the lawn. We generally call the larvae of the scarabs “white grubs” and the adult beetles “June beetles”, but the family Scarabaeidae is most properly called scarabs. This is a pretty flashy family of beetles, including the astounding Rhinoceros beetles that can be up to 6 inches long, the incredible golden and silver scarabs found in the rainforests of Latin America, and other kinds with brilliant colors of all kinds. Unfortunately there are some nasty derelicts in this family too, such as the Japanese Beetle, which devastates turf and ornamentals alike, and feeds rampantly on fruit and flowers.

It depends somewhat on where you live in North America as to the beetle you think is a “June” beetle. Out west, along the Pacific Coast states, there are a number of species of big scarabs called the “Lined June Beetles”, and these may be our most noticeable June Beetles.

Masked Chafer
A smaller brownish-orange kind is in a group called the “masked” chafers, and this is another that I commonly see flying around and coming to my porch lights on July evenings. They get their common name from the black “mask” across the front of their head, and throughout the eastern United States the Northern and Southern Masked Chafers are a major lawn problem.

While some of the larger June beetles require 2 or 3 years to complete their life cycle, the masked chafers need only one year. The adult beetles emerge from the ground in late spring and early summer to mate and lay their eggs. The adult beetles do not feed, so they live only a short time.

The larvae, the “white grubs”, then feed in the soil for the remainder of the summer and when weather cools they dig deep into the soil and spend the winter in their last larval stage. The adult beetles are active only at night, so it may be common for you to find them at your porch lights in the summer, an indication that your lawn may be the one producing these insects.

May Beetles
Some of the largest June Beetles are also called May Beetles, even though those “month” designations are not necessarily indicative of when you’ll see them. These big insects are light brown to dark brown in color, and it is their big larvae that are most often referred to a white grubs. Typically a scarab larva assumes a “C” shape, with the darker head and long legs at the front end, and the curved white body widening as it moves toward the back end, giving it a bit of a bulbous appearance. There are over 150 different species of these May and June Beetles in North America, but no more than 10 species will be problems for ornamental lawns. The adult beetles also feed, but on the leaves of nearby trees, especially oak trees, and if their numbers are high they can produce some noticeable damage to your trees.