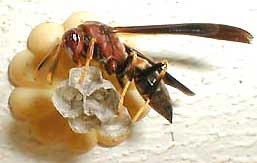 So what do you see in the image on the left? But before you look hard, let me tell you that the flower-like thing behind the wasp is just a plastic decoration on the wall of my neighbor, who took the picture.

Maybe when you study the picture you see a paper wasp guarding her nest, and if you’re really sharp maybe you notice the little eggs at the bottom of each nest cell.

Now, here’s what you missed:

It’s early spring and this female has just emerged from winter hibernation, built the paper nest she’s sitting on, laid eggs in the cells, and when the eggs hatch she’ll feed the larvae with prey she brings to them in their cells.

Eventually adult female wasps will emerge from the cells, and at that point the wasp in the picture will stop foraging, become a queen, and begin ruling her offspring, known as workers, by aggressively dominating them. As a consequence of confrontations and aggressive interactions, each individual in the community will know who dominates them, and whom they can dominate. If the queen dies or is otherwise lost, the most aggressive worker takes over. This worker begins laying eggs and continues to dominate all below her. As summer progresses, the nest is enlarged, more eggs are laid, more workers produced, and the queen dominates more and more workers. It’s possible that a wasp from outside the colony will come and overthrow the queen and become queen herself. The wasp in the picture, then, is preparing to set up a ruthless society of slaves that will be kept in line by force…

If you know basic life-cycle information about the various groups of insects, every time you meet an insect you’ll “see” much more that just what the image before your eyes portrays.

In the case of the above photograph, instead of just seeing a wasp on a nest, you’ll see a whole drama unfolding….

Though I’m not sure what genus and species the wasp in the picture belongs to, when I look at that picture I see the whole drama just described because that’s the typical story for nearly all members of the wasp subfamily Polistinae, the paper wasps. Since I know some general facts about paper wasps, when I meet a particular paper wasp, I already know specific facts about it, even if I’ve never seen a wasp like it before.

So that’s how knowing life cycles is so much fun. Now the question is, “How do you learn life cycles?”

Nearly all good field guides are organized so that closely related organisms are considered together — all wasps in these page, all bees in those pages, etc. Moreover, each section of such field guides usually provides basic facts about the life cycles of the organisms covered there.

Another approach is to think evolution-wise.

On our Evolutionary Trees page we make the point that evolving life proceeds more or less like a tree that starts as a single sprout, and branches, and then the branches branch, and so forth, with the branches growing at different rates, and branching with various degrees of vigor. One offshoot of this fact is that the species of any particular “branch” share many traits — traits they’ve inherited from a common ancestor. The insect world (which is a branch of the arthropod branch of the elocutionary tree) is huge, and it itself divides into many branches. Each insect order is a branch, and each of those branches has branches itself, which are families… and of course those branches are branched, too, into genera and species.

Here’s a nice chart, which comes close to being an upside-down evolutionary tree for the insects.

In other words, you can think of “the dawn of insect life” as being at the top of the chart, with each branch in the insect tree representing a major evolutionary advance millions of years later.

So, at the chart’s top we see that one of the first very important innovations to evolve in the insect world was that of acquiring wings. The wingless orders are considered to be most like the very first insects of about 400 million years ago. Winged insects didn’t come along until around 300 million years ago. The second big “invention” among the insects involved the ability to fold their wings over their bodies when not in use. The most recent “insect invention” was the evolution of “complete metamorphosis.” This innovation has been such an advancement, that, as the chart says, most insect species alive now belong to this group! One reason complete metamorphosis is so great is that the pupa resting stage is typically well camouflaged, plus the pupa’s hard husk protects the developing adult form the outside world.

Therefore: The next time you see an insect, if you know the life-cycle facts about the basic groupings the insect belongs to, you’ll also automatically know a lot about what you’re seeing, even if you don’t know the insect’s complete name!