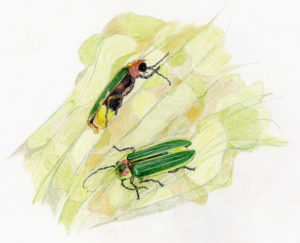 My Home: I am found in humid, warm areas of the world, most often in rotting wood, by the edges of stream, ponds, drainage ditches or in some other moist area. The greatest numbers of fireflies are found in Asia and South America.

What I eat: As a larva, I eat earthworms, snails and slugs. As an adult, I eat pollen or other insects.

What I look like: I am approximately ¾ of an inch long, and I usually am black with two red spots on my head, with my outer casing outlined in yellow.

How I am born: I go through four stages of development: egg, larva, pupa and adult. The eggs are deposited in the ground and hatch in about a month. As a larva, I feed all summer long and hibernate during the winter. The next summer, I emerge and in about six weeks become an adult. Some species can live for several years by hibernating as larva during the winter.

Learn All About Fire Flies

Honestly now, could there be anything more magical than a summer evening in the country or the woods, with a sparkling of little flashes going on around you?

Despite the Name, They Are Actually Beetles
But just what is a “fire fly”, and maybe you haven’t even heard of “lightning” beetles? As the child enjoying this bit of wonderment you likely gathered some of them up in your fingers and placed them in a jar, where you could carry them around and further enjoy what they had to offer. Well, it turns out that fireflies, contrary to their name, are not really flies, but instead are kinds of beetles.

There are many different kinds of fireflies in the United States, and hundreds more kinds around the world. They are in a family of beetles given the scientific name of Lampyridae, probably pretty appropriate, since it starts off with the word “lamp”.

Larvae
Lightning beetles are in a different, but related, family called the Phengodidae, and it is not the adult-looking beetles that actually light up, but the larvae and the females. In both groups of beetles the adults are very soft bodied, not like many of the beetles you might find crawling around your garden that have very hard wing covers that provide them with protection. Because of this soft body the fireflies and lightning beetles could be more vulnerable to being eaten by predators, such as frogs or birds, so they evolved a protection in the form of nasty tasting body juices. Predators come to realize they taste bad and learn to leave them alone, recognizing these beetles by their gaudy colors.

There are some species of fire flies in which the female remains in the form of the larva, or worm, even as the adult beetle. With Lightning Beetles all the females stay in the larva shape, a phenomenon referred to as “larviform”, and these larvae and the female are called “Glow Worms”. Even in this shape she still can breed and produce offspring. For those of you who have personal memories from the 1950’s you might remember a popular song with the line “Glow little glow worm, shimmer, shimmer….”. If you ever find one of these individuals in an old, rotten log or under a board on the ground, put it in a jar and take it into a very dark room, and you will observe the dull blue glow coming from the rings around her body that are yellow in the light. There is one beautiful species in some tropical countries where the female is called “The Railroad Worm”. It is about 2 inches long, and has rows of yellow and red lights running the length of its body.

Where Can You Find Them?
Actually, fire flies can be found over most of the United States, particularly those states with high humidity in the summer, and may be very common in tropical countries such as in Central or South America. On trips to Costa Rica and Ecuador I have observed them in such numbers that it looked like a twinkling Christmas tree. They are even found in California, although you will never see one lighting up there because the species that occur in that state do not have the organs that produce light, even though they are closely related to the kinds that do. If you are lucky you might stumble across the larvae, which do light up, or the females of some kinds that continue to look like larvae, and they too light up in that dull, blue glow.

Click Beetles
There also are some species of beetles we call “click” beetles, due to their ability to snap themselves up into the air when they get turned over on their back. When they do this there is an audible clicking sound, especially if they happen to be on your kitchen linoleum floor, where they can drive your cat crazy as it tries to catch them. Some of these click beetles are large brown kinds, in a scientific genus called Pyrophorus – just as in “pyrotechnics” or fireworks – and they have two large yellow spots near their head that will light up for them.

How Do They Make the Light?
Mother Nature created a rather ingenious method for this, and we humans have managed to find a way to copy it. Who among us has children who haven’t played with “glow sticks” or colorful glowing necklaces they bought at the local fair. We can buy emergency glow lights, whereby you bend the plastic stick to create a bright, green light that can last for a few hours. The light is created by a chemical reaction, and this is the same in the fire fly. We are told, with the glowing necklaces, that if we put it in the freezer it will prolong the light. Of course, you really can’t see it in the freezer, so you might as well leave it out and enjoy it while it’s on.

Most of our fire flies that light up do so on the last two segments of their abdomen, on the bottom side. Within these segments, in specially designed chambers, they have two chemicals present, called “luciferin” and “luciferase”. For those of you who have taken some biology classes you might remember that a chemical name that ends with “ase” is an enzyme, and enzymes act to cause things to happen. Well, a third ingredient is necessary in order to cause the light, and that is oxygen. The beetle can control the flow of oxygen into these chambers, so when it has a reason to flash it opens things up, lets a little air in for the flash, mixes the chemicals, and closes the chamber again to shut it off.

What Does a Fire Fly Use the Light For?
Since the fire fly can create and control the production of light as it wishes, it stands to reason that it does so for a purpose. Actually, there are a couple of purposes, and one of them is so dark and sinister that it probably will make for a good horror movie some day. In glow-worms the light does not flash on and off, but simply is on all the time, and its purpose is not well understood. However, Nature doesn’t waste a lot of time creating useless things, so perhaps the light enables males, which do not have light production, to find females.

The main purpose of the light is for mate recognition. In other words, males and females of the same species are able to find each other in the dark by flashing their lights in a sequence that is unique to that species. There may actually be a series of flashes, but they happen so quickly that our eyes see it only as a single flash, whereas the beetles recognize it as their own. Sometimes all the individuals of the same species in an area may begin flashing in unison, so that entire trees full of the beetles are flashing on and off at the same time, a phenomenon observed in some Asian countries.

Now, just to put a dark side to this thing of beauty, there is one species of fire fly that feeds on other species of fire flies, and it greatly enhances its chances of finding a meal by learning to mimic the flash sequence of the other species in the area. Once it has figured this out it begins flashing, drawing males of other kinds that were assuming they were about to meet an appropriate mate, and once that other beetle is close enough it is grabbed and consumed, ending what otherwise had started out as a wonderful evening for that main course.

What do Fire Flies and Glow Worms Do?
The niche in the environment that both of these families of beetles fill is that of predators. They eat other animals, but please relax, because those animals generally are other bugs or things that we may not want around anyhow. Your dog and parakeet are not at risk.

The lightning beetle larvae and females are predators of millipedes, those long, tubular, slow-moving critters that you might see in the woods if you turn over a log. They also may feed on some other small bugs they can find. When they attack a millipede they first bite it behind its head, paralyzing it. They then chew the head off and eat their way right inside, feeding on through the body of the millipede and coming out the back end, leaving behind an empty shell and a very unhappy millipede.

Fire Fly larvae are predators of snails and some small bugs as well, attacking them and crawling right inside the snail shell to ensure they get every last delicious bite. In those species where the female stays “larviform” it is reported that their glow can be seen right through the shell of the snail.

Are Fire Flies Dangerous to People?
Absolutely not. Of course, you probably wouldn’t want to eat one, since it probably tastes terrible, but they cannot sting, don’t bite, and don’t do anything to our homes or yards that we’d prefer they didn’t. In fact, they are two families of bugs that we easily can classify as “beneficial’ to us, and like so many of the other beneficial insects we need to learn how to identify these good guys so we can avoid harming them.