Cicadas are flying, plant-feeding insects of the Order Homoptera, which also contains groups such as the leafhoppers, aphids, and scale insects. Adult cicadas tend to be large (most are 25-50mm), and most North American species have clear wings, held rooflike over the abdomen. Cicadas have conspicuous long-range acoustic signals produced by specialized abdominal structures called tymbals; in most species only the males have these structures. Most cicadas are active only during the day and/or evening.

All but a few cicada species have multiple-year life cycles, most commonly 2-8 years (de Boer and Duffels 1996). Cicadas in which almost all of the individuals in a given location mature into adults in the same year are periodical. Most cicada species are non-periodical, meaning that some adults appear in most or all years.

The most prominent and best-studied periodical cicadas are seven species from eastern North America belonging to the genus Magicicada — four species with 13-year life cycles (including one new species just described), and three with 17-year cycles. The three 17-year species are generally northern in distribution, while the 13-year species are generally southern and midwestern. Magicicada are so synchronized developmentally that they are nearly absent as adults in the 12 or 16 years between emergences. When they do emerge after their long juvenile periods, they do so in huge numbers, forming much denser aggregations than those achieved by most other cicadas. Entomologists often use the common name periodical cicada to refer to this genus alone. Periodical cicadas are also known as “17-year locusts” or “13-year locusts” but they are not locusts, which are a type of grasshopper.

Magicicada adults have black bodies and striking red eyes and wing veins, with a black “W” near the tips of the forewings. Most adults emerge in May and June, and live for only a few weeks. Certain other medium- to small-sized late spring and summer cicadas are sometimes mistaken for the periodical cicadas, such as those in the genera Diceroprocta and Okanagana; these other cicada species may be present May-July, may have black or orange coloration, and may also be somewhat periodical, though not as dramatically so as Magicicada. Common North American non-periodical cicadas include the large, greenish “dog-day” cicadas (genus Tibicen ) found throughout the U.S. in the summer. Non-periodical cicadas are often called “annual cicadas” (even though they have multiple-year life cycles) because in a given location adults can be found every year.

Are cicadas locusts?
NO! True locusts belong to the same family of insects as grasshoppers, in fact they look just like a grasshopper. The confusion stems from the fact that both Locusts and Magicicada emerge in periodic swarms. Locusts are far more destructive, destroying all plant life in their path. Cicadas just fly around trees and kill a few branches here and there.

Will the cicadas kill trees, shrubs or flowers?
No. Cicadas don’t kill flowers or shrubs, but they will do minimal damage to deciduous trees (maples, oaks, fruit trees). Unless you have an orchard or a prize ornamental fruit tree I wouldn’t worry. Cicadas actually are a benefit to trees, as they destroy the weaker branches. Please don’t use pesticides — you’ll destroy the good bugs as well and the “nuisance” bugs, and ultimately do your garden and the environment a huge disfavor.

Do cicadas bite or sting?
No. Cicadas aren’t equipped to bite or sting. They do have prickly feet which can pinch or scratch. If they confuse you with a tree branch they might try to drink fluids from you or lay some eggs in you, which you would definitely feel.

I dug up a white grub in my back yard. Is it a cicada?
Maybe. Just about every insect goes through a grub in the dirt phase, and they pretty much all look alike to the novice. If it was sucking on a root, looks just like a nymph and is soft and white, then it’s probably a cicada.

How do they make that noise?
Only the males make that noise (although some females are capable of making sounds). They have drum like membranes on their abdomen that vibrate very quickly, creating the creepy tones. Every species of cicada has a unique call. The frequency and tone of their calls is related to the temperature, and the time of day.

What do they eat?
Cicadas subsist solely on the fluids of a living deciduous tree. Magicicada adults really don’t eat — they mate and die, living off their fatty bodies — but they are capable of sucking fluids from trees. As larvae and nymphs they suck tree fluids from the roots of deciduous trees. Tibicens and other Genus of cicada do eat as adults. If you capture a cicada, giving the creature a broken branch to suck on probably won’t nourish it.

What are the life stages of a cicada?

Larvae
Once they hatch they look like a cross between wiggly rice and a termite. They suck on the branch they hatched on for a while, they fall to earth and begin digging in search of a root.

Nymph
Once they’ve been sucking on the root for a while they become nymphs. Once the time is right, the nymph crawls to the surface, and crawls up the nearest tree.

Adult
Once they crawl from the ground and anchor themselves to what they think is a tree (I’ve seen them on barbecues, stone wall and garden hoses) they molt, leaving their nymph skin behind. Their wings dry and they start looking for a mate. Once they mate, they die. Your dog eats the remains. 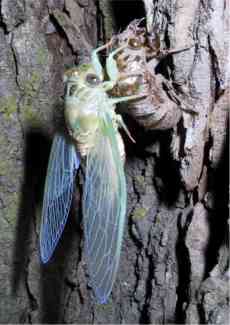 How long does a Magicicada emergence last?
About a month. First, you’ll find “soil chimneys” around your yard. A few days later, they emerge as nymphs, but they don’t all emerge on the same day. It might take a week or more for every cicada in your area to emerge. Once they emerge they climb what they hope is a tree, they shed they shells, and begin to dry their new wings. Once their new skin and wings are dry and hardened, they begin to fly around looking for mates. After they mate, the male, exhausted, quickly begins to die. Once the female find a branch to scratch and lay her eggs in, she also begins to die. Your dog eats them. The eggs hatch and the larvae begin feeding on the branch sap. When they’re big enough (about the side of a grain of rice) they fall to earth and start digging. They dig and find a root suitable for sucking. 17 years later they emerge again.